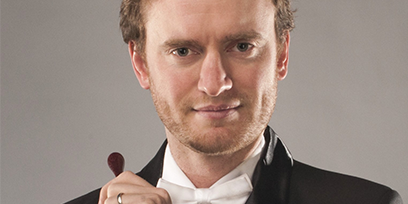 An acclaimed Violist and chamber musician, Luke Spicer is now establishing himself as one of Australia’s foremost young conductors. Graduating with a Masters of Conducting from the Sydney Conservatorium, he has furthered his studies in Freiburg, and Manchester; and attended the Fondazione Musicale Chigiana, Siena, working under Maestro Gianluigi Gelmetti. Luke became a participant in the Symphony Services International Conductor Development Program during 2016 working with Johannes Fritzsch, Giordano Bellincampi, and Marco Letonja.

In 2014 Luke was appointed Principal Conductor of the Sydney University Symphony Orchestra, in 2016 he became Music Director of Blush Opera in Sydney, and was the Associate Conductor of the Willoughby Symphony Orchestra for several years. Luke made his operatic debut in 2015 with the innovative production of Gluck’s Orfeo ed Euridice, directed by Shannon Murphy and featuring Silvia Colloca, Stacey Alleaume, and Catherine Bouchier in the principal roles, as part of the Spectrum Now Festival within the Art Gallery of NSW, and in 2016 conducted a powerful sell-out production of Puccini’s il Tabarro, directed by Constantine Costi.

In 2021 Luke will conduct Opera Australia’s National Tour, which will be a new production directed by Matthew Barclay.