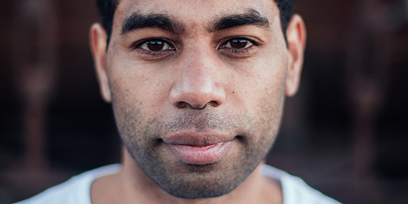 Marcus Corowa has captured the hearts of Australians with his silky, soulful voice and charming stage presence. An award-winning First Nations entertainer, Marcus is an accomplished singer/songwriter, composer, actor and mentor who has been turning heads for more than a decade.

Drawing on his Aboriginal and South Sea Islander heritage, Marcus creates captivating music with elements of blues, jazz and funk; a combination that won him the ‘Most Promising New Talent in Music’ award at the 2012 Deadly Awards and that can be heard on his EPs Water & Air and The Greater You.

Since then, Marcus has found success as an independent recording artist, composer and actor. For over a year, Marcus entertained audiences as one of The Drifters in the national touring production of Beautiful: The Carole King Musical. He appeared in Sydney Theatre Company’s production of The Secret River, and composed the music for The New Black, the story of an Aboriginal lawyer reconnecting with his cultural roots after rejecting them for corporate success.

Marcus is an exceptional live entertainer which has resulted in amazing partnerships. He was part of the 30 year anniversary celebrations for Australian Catholic University’s Indigenous program, Yalbinga, performed with the Australian Brandenburg Orchestra at The National Centre for Indigenous Excellence Reconciliation Action Week, and has secured residencies with both Voyages Sails in the Desert and on the Indian Pacific. Marcus also performs regularly at festivals across Australia.

Accepted for Accelerate in 2016, a leadership skills program for Aboriginal and Torres Strait Islanders working in the creative industries, and the Smugglers of Light Foundation Music and Media Award in 2015, Marcus is a positive role model and advocate for diversity and inclusion, committed to using his voice to mentor and inspire young Australians.