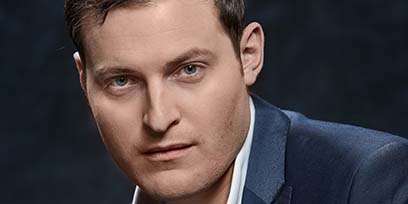 Renowned for his ‘pure, glowing tenor’, Michael Petruccelli is one of Australia’s emerging operatic stars.

Major appearances in 2016/2017 included Stephen Goldring (The Eighth Wonder) and Pedro (Two Weddings, One Bride) for Opera Australia and Arturo (Lucia di Lammermoor), Beppe (Pagliacci) and The Minister (The Princess and the Pea) for Victorian Opera.

His regular recital collaborations have included the series Night and Day (with associate artist Elyane Laussade), Brahms’ Liebeslieder-Walzer with The Team of Pianists and Britten’s The Heart of the Matter and Canticle III (‘Still Falls the Rain’) with Ensemble Goldentree.

Formerly a Melba Opera Trust Scholar, Michael completed a Master of Music in Opera Performance at the University of Melbourne.  He was twice a finalist in the Lady Fairfax New York Scholarship and was a winner of both the Richard Bonynge Study Scholarship  and the RJ and AF Hamer Opera Scholarship,

In 2018, Michael Petruccelli returned to Opera Australia as Goro in their touring production of Madama Butterfly before taking up a full-time young artist position with Oper Frankfurt.  2019 roles include Basilio/Don Curzio in Le nozze di Figaro for Oper Frankfurt, Pedro (Two Weddings, One Bride) for Opera Australia and Aquillo (Farnace) for Pinchgut Opera.

In 2021, Michael sang Almaviva in The Barber of Seville for West Australian Opera; for Victorian Opera, he appeared in Parrawang Lifts the Sky. This year he sings Le Mesurier in Voss for State Opera of South Australia; Prunier in La rondine for National Opera, Canberra and Jason in Medée for Pinchgut Opera.