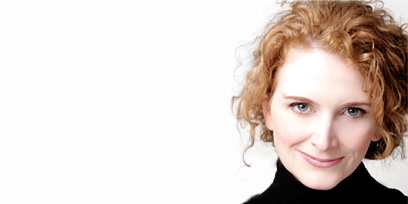 Australian soprano Miriam Gordon-Stewart's debut as Sieglinde for Opera Australia was described as "astonishing" with "a powerful voice which radiates joy…her exultant "O hehrstes Wunder" is a heartbreaking cry of desperate hope" (Michael Magnusson – Arts Hub). Miriam has most recently returned to the Deutsche Oper, Berlin for performances of Gertrud in Hänsel und Gretel under the baton of Donald Runnicles. In 2014, she performed Leonore (Fidelio) on location at the former political prison in Cottbus, Germany, and the title role in Tosca for Staatstheater Kassel. She also made her role debut as Desdemona in Otello with State Opera of South Australia. In 2013, Gordon-Stewart triumphed as Alice in Falstaff for Korean National Opera- the production was broadcast nationally on KBS TV.


Described in the French press as “phenomenal” and “a genuine singer-actress” for her Châtelet debut, she was a resident soloist with the Hamburg Staatsoper from 2005-2009. There her roles included Jenufa in Jenufa, Madame Lidoine in Dialogues des Carmélites, Alice Ford in Falstaff, Micaëla in Carmen, Rosalinde in Die Fledermaus, Helena in A Midsummer Night’s Dream, the Countess in Le Nozze di Figaro, Elettra in Idomeneo, Donna Elvira in Don Giovanni, Mimi in La Bohème, Liù in Turandot, Arabella in Arabella, Freia in Das Rheingold and Helmwige in Die Walküre in the premiere of Hamburg’s new Ring Cycle.


Guest engagements have taken her to the Deutsche Oper Berlin as Alice, Mannheim National Theatre and Staatstheater Kassel as Eva in Die Meistersinger von Nürnberg, Graz and Wuppertal Opera as Arabella, and the Gran Teatre del Liceu. Miriam presented Ellen Orford in Peter Grimes and the title role of Tosca at the Bremerhaven Opera, Zemlinsky’s Lyric Symphony in Lisbon and Elsa in Lohengrin at the Kassel State Theatre. She has had further concert engagements in Kassel and with the Orquestra Gulbenkian in Lisbon, and with the Dresden Philharmonic singing Britten’s War Requiem.


As a member of Opera Australia in Sydney from 2001 to 2005, Miriam debuted the roles of Donna Anna in Don Giovanni, Eva, Miss Jessel in The Turn of the Screw, Rosalinde and Mimi. She also collaborated with Simone Young and Orchestra Victoria in a live broadcast of Strauss’s Four Last Songs.


In 2009, Miriam launched her freelance career with a debut in the Bayreuth Festival as Helmwige under the baton of Christian Thielemann. She also was praised as “dramatically phenomenal” (Frankfurter Rundschau) in the challenging lead role of Rosine Kampf in the World Premiere of Oscar Strasnoy’s Le Bal in Hamburg, where she also appeared as a guest for performances of Hanna Glawari in Die lustige Witwe. Further engagements have included her return to Hamburg as Betty Joy in Bliss, Suor Angelica in Sebastian Baumgarten’s premiere of Il Trittico at the Niedersächsische Staatsoper, Hannover and Leonore (Fidelio) for State Opera of South Australia.


In 2015 Gordon-Stewart makes her debut with the Sydney Symphony Orchestra in Beethoven 9 and Wozzeck 3rd Act (Marie) conducted by David Robertson. Future engagements include her debut as The Marschallin in Der Rosenkavalier.