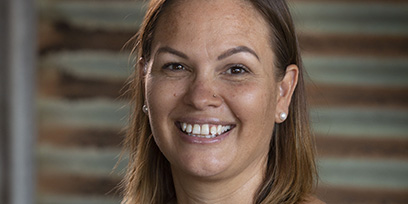 Recipient of the ‘Too Solid’ female vocalist of the year award Naomi Pigram is a proud indigenous person of Yawuru and Wadjarri people.

Naomi is a singer, songwriter, performing artist and community service worker from Broome. Her professional performing career began at the age of 15 starring in Bran Nue Dae cabarets. Naomi studied dance at Naida and, at the age of 17, toured nationally in the role of Christina with Corrugation Road across three different tours. In 1999 she played the lead in the Dendy-award winning short film Kulli Foot and has supported many major Australian Artists including Missy Higgins and Archie Roach. In 2013 Naomi appeared in the film Dark Whispers which was written and directed by her sister Ngaire Pigram. This earned Naomi a WOW award for her leading performance.

With over 25 years of experience in the performing arts and community service sector Naomi has combined her knowledge of the complex social issues in the region and creative talents to develop and implement projects to encourage and promote self-discovery, acceptance and change for its participants.