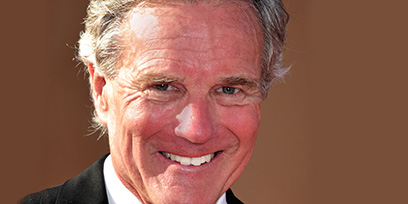 Nicholas first appeared on Broadway as the ten-year-old son of Sir Michael Redgrave and Googie Withers in Graham Greene’s The Complaisant Lover, winning enthusiastic praise from the New York critics. From that first footstep onto the stage of the Barrymore Theatre, Nicholas has had a lifelong love of acting, whether on stage, film or television. He has had the good fortune to work all over the world, and with many of the greatest artists of the time. He has been featured in over 40 films, some 250 television shows and countless plays in New York, Los Angeles, Chicago, Sydney Opera House, Melbourne Theatre Company, and national tours all over the United States, Great Britain and Australia, performing the works of Graham Greene, Shakespeare, Oscar Wilde, Noel Coward, Alan Ayckbourn, Sean O’Casey and Neil Simon among many others. But, as he and his film “siblings” always say, no matter how many wonderful roles he plays, most people will always think of him as Friedrich Von Trapp in the most successful film musical of all time, Rodgers and Hammerstein’s The Sound of Music.

Nicholas’ connection with Rodgers and Hammerstein has continued since making that film, and in 2019 he won first prize at the British Television Awards for a BBC documentary he wrote and presented, Climb’d Every Mountain with Nicholas Hammond, comparing the fictional story of the film to the factual story of the real Von Trapps, many of whom are his close friends to this day.

For the Gordon Frost Organization (now Crossroads Live Australia), he toured Australia and New Zealand with Dame Julie Andrews in a hugely successful two-person show, a wonderful reunion 50 years after they made the film.

Despite a global career, with films from Lord of the Flies to Ladies in Black and Once Upon a Time in Hollywood, starring in his own American prime time series The Amazing Spiderman, it is still a thrill to return to the world of Rodgers and Hammerstein with Cinderella. The fact that Julie Andrews played Ella in the first production of the show makes the connection even stronger, and for Nicholas to play Sebastian now is a joy.