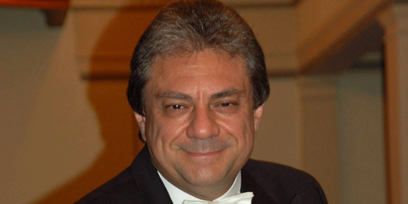 Pier Giorgio Morandi was the Principal Oboist for the Orchestra del Teatro alla Scala in Milan for ten years. He studied composition at Conservatorio Giuseppe Verdi in Milan, and conducting at Salzburg Mozarteum with Ferdinand Leitner.

During the years spent at La Scala, Morandi was Riccardo Muti’s and later Guiseppe Patanè’s Assistant Conductor, from whom he gained experience in refining the Italian repertoire and learning the secrets of the Italian operatic tradition.

In 1987 he studied Leonard Bernstein and Seiji Ozawa in Tanglewood, USA. In the same year, Morandi won the “Tanglewood Competition”, also known as “Bernstein Prize”. In 1989 he became the Deputy Principal Conductor at Teatro dell’Opera in Rome, where he conducted Ernani, Madama Butterfly and several symphonic concerts. In 1990, he recorded his first opera with Teatro dell’Opera, Paisiello’s Don Chisciotte. From 1991-96, he was the Principal Guest Conductor at Budapest National Opera House.

Recent seasons’ highlights include La Fanciulla del West, Tosca and Un Ballo in Maschera at Stockholm Royal Opera House (where he held the position of Principal Guest Conductor), Aida in Oslo and Qatar, L’elisir d’amore, La Bohème and Don Carlo in Dresden, Maria Stuarda in Frankfurt, Macbeth at La Scala, Attila at the Palace of Arts in Budapest, Rigoletto in Naples and a symphonic concert at Musikverein in Graz.

He is at present Principal Guest Conductor at the Helsingborg Symphony Orchestra.