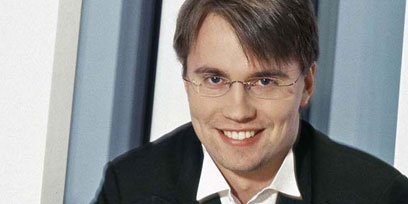 Pietari Inkinen, now working internationally at the highest level, was appointed Music Director of the New Zealand Symphony Orchestra in 2008. He has won unanimous praise from audiences and critics both for his performances on tour in New Zealand and for his recordings with the Orchestra on Naxos and for EMI. In November 2010 Inkinen led the Orchestra on a highly successful tour of European cities including Vienna, Lucerne, Geneva, Frankfurt and Hamburg with Hilary Hahn as soloist. Pietari Inkinen is also Principal Guest Conductor of the Japan Philharmonic Orchestra, a post he has held since September 2009.

Inkinen enjoys successful collaborations with soloists such as Vadim Repin, Hilary Hahn, Pinchas Zukerman, Nikolaj Znaider, Jean Yves Thibaudet, Alexander Toradze, and Elisabeth Leonskaya. In the operatic pit, he has conducted three productions at the Finnish National Opera including Eugene Onegin and made a very successful debut at La Monnaie in Brussels conducting the Rite of Spring with the Pina Bausch Dance Company. In spring 2012 he made debuts at the Berlin Staatskapelle and Bayersiche Staatsoper Munich conducting Eugene Onegin and this season embarked on Wagner’s complete Ring Cycle at Palermo’s Teatro Massimo directed by Graham Vick.

In the studio, his recordings for Naxos with the New Zealand Symphony of the complete cycle of Sibelius Symphonies, the premiere recording of Rautavaara’s Manhattan Trilogy, other music by Sibelius and the Brahms Violin Concerto with the Bournemouth Symphony have all been greeted with critical acclaim:  Gramophone said of the release of music by Sibelius:

“Here’s further proof that Pietari Inkinen is a young conductor with confidence and talent to spare … the New Zealand SO respond with conspicuous poise and application for their Finnish chief (they really do sound like a rejuvenated band). Inkinen’s readings, too, show a real feeling for the idiom: phrases are shaped – and textures sifted – with fastidiousness and imagination, and he brings abundant recreative flair and cogent grip to the task in hand…”

His recording for EMI of Wagner arias and orchestral pieces with Simon O’Neil was released last summer and his recording with the Bavarian Chamber Philharmonic received outstanding reviews and was voted the BBC Music Magazine’s recording of the month.

Inkinen is also an accomplished violinist and studied at the Cologne Music Academy with Zakhar Bron. He has appeared as soloist with many of the leading Finnish Orchestras including Finnish Radio Symphony, Helsinki Philharmonic with whom he performed the Sibelius Concerto in a concert that celebrated the 100th anniversary of their performance of the work and has play/directed orchestras including Teatro Carlo Felice Genova, RAI Torino, Norrkopings Symphony and Orchestre National de Lyon. He also enjoys chamber music collaborations and has appeared with the Inkinen Trio at the Wigmore Hall and St. John’s Smith Square.