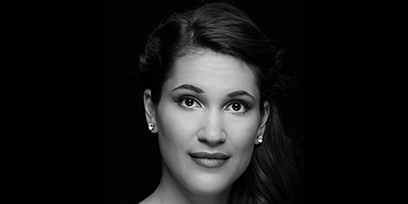 Soprano Rachel Pines has followed a musical journey leading from Canada, across Europe, to Australia. This season, Rachel sang Mrs. Hayes in Floyd’s Susannah with Opera New England, and created the role of Mary Sullivan in The Seven Sopranos’ premiere tour of Songs from Stage and Screen. In concert, she appeared with the Queensland Symphony Orchestra singing the Queen of the Night aria. Last season, Rachel made her Italian debut as Despina in Così fan tutte with the Trentino Music Festival, her German debut as First Lady and First Spirit in The Magic Flute (Lyric Opera Studio Weimar), and sang Queen of the Night in The Magic Flute with the Queensland Conservatorium. Other roles include Second Lady in The Magic Flute, Frankie in Frankie and Johnny (Coghlan), and Mavis in City Workers in Love with Opera Laurier. As a participant of the Lisa Gasteen National Opera School 2016, Rachel sang excerpted roles of La Musica in Monteverdi’s L’Orfeo and Euridice in Offenbach’s Orphée aux enfers . Other scenes include Zerbinetta and Najade in Ariadne auf Naxos, Sophie in Werther, Rosina in Il barbiere di Siviglia, and the title role in Alcina. Later this year, Rachel will tour New Zealand tour with The Seven Sopranos, and sing the role of Frasquita in Carmen with the Queensland Symphony Orchestra and the Lisa Gasteen National Opera School. Rachel holds a Masters of Music Studies from the Queensland Conservatorium Griffith University, and was the 2016 recipient of the Elizabeth Muir Memorial Prize for Postgraduate Singing.