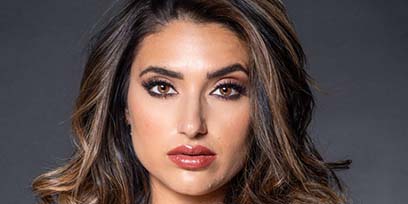 Rebecca Gulinello is a dual citizen Italian/Australian Soprano. She earned a Bachelor of Music performance (Honors) from the Melbourne Conservatorium in Victoria Australia and was the recipient of The Amelia Joscelyne Scholarship with the Dame Nellie Melba Opera Trust.

She studied in Italy in 2014 on scholarship with the Acclaim Awards and Rotary Clubs of Melbourne and Cheltenham.

She was a 2015 Finalist in the Herald Sun Aria Awards and IFAC Australian Singing competition.

Rebecca completed her Graduate Artist Diploma/Masters at the prestigious Academy of Vocal Arts in Philadelphia and her last role to perform was Amelia, Un ballo in maschera, before COVID cancellations.

Rebecca has sung various roles at AVA including Tamara in The Demon (performed in Russian), Papagena in the Magic Flute, covered Leonora in Il Trovatore, performed The Componist in Ariadne auf Naxos, Anna in Le Villi, and covered Fiordiligi in Così fan tutte.

She also conceptualised, produced and performed in her first Fundraising Concert event for the Australian Bushfires appeal in 2020 which raised over $10,000 USD.

Rebecca won her first international competition in the Academy of Vocal Arts annual Giargiari Bel canto Competition where she sang at the Kimmel Centre in Philadelphia.

She was also a finalist of the Mario Lanza Competition, The Loren. L. Zachary Competition (but was unable to attend due to COVID restrictions) and is a Metropolitan Opera National Council District winner.

In December 2018 Rebecca made her debut with the Newark Symphony Orchestra and the New Jersey Master Chorale Symphonic Orchestra in their Christmas concerts.