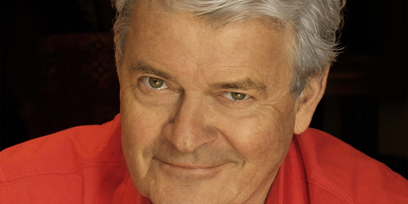 At the age of 13, Reg Livermore began hiring local halls to stage performances of his own pantomimes starring coerced children from his neighbourhood.


Reg began his professional career at Sydney’s Phillip Street Theatre in 1957 as an understudy to Gordon Chater and Barry Humphries in the revue Around The LoopCross Section, he shared the stage with Ruth Cracknell, June Salter and John Meillon.


In the 1960s Reg hosted the ABC children’s show Crackerjack and Saturday night variety show I’m Alright Now. In 1969 he landed a major role in the musical HAIR followed by Jesus Christ Superstar. In 1974 he played Dr Frank’n’Furter in The Rocky Horror Show.


In 1975 Reg conceived his first one-man show, Betty Blokk Buster Follies, its success heralding Wonder Woman, Sacred Cow, Son of Betty and Firing Squad. His 1980 debut in London created a sensation when the audience tried to boo him off the stage.


Reg returned to Australia and starred in the Broadway Musical Barnum. Throughout the 1990s he continued to perform one-man shows including Wish You Were Here; Red Riding Hood; Leonard’s Last Hurrah. He received an Australian Artists Creative Fellowship in 1995, and in 1996 was appointed an Officer in the Order of Australia.


Reg appeared regularly on Burke’s Backyard and Our House for 10 years, published his autobiography Chapters and Chances in 2003, and in 2004 he won the leading role in The Producers, for which he received a Mo Award.


Reg has appeared for Opera Australia in various Gilbert and Sullivan operas and played Henry Higgins in its 2008 production of My Fair Lady. The Performing Arts Collection celebrated his career during 2011 when a major retrospective exhibition was mounted at The Arts Centre Melbourne. He was the recipient of the first Adelaide Cabaret Festival Icon Award in 2013. His most recent performance as The Wizard in Wicked won him a Helpmann Award, and the 2014 Sydney Theatre Award for Lifetime Achievement.