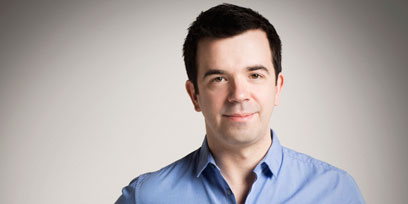 One of the brightest stars of the younger generation of conductors, Rory Macdonald’s career was launched following assisting roles with Ivan Fischer, Mark Elder and Antonio Pappano. Equally at home on the concert platform and in the opera house, he draws out distinctive interpretations of classical and romantic repertoire, and brings passion and intellectual insight to contemporary scores.

In December 2013, Macdonald stood in for Mariss Jansons for two concerts with the Royal Concertgebouw Orchestra at the National Centre for the Performing Arts in Beijing and at the Sydney Opera House, marking the end of the orchestra’s Asia and Australia section of its world tour celebrating its 125th anniversary. Orchestral debuts in the 2014/15 season and beyond include the London Philharmonic, Royal Flemish Philharmonic, Royal Scottish National, Vancouver Symphony, Queensland Symphony and Japan Century Symphony Orchestras. In summer 2015, Macdonald will tour China with the National Youth Orchestra of Scotland.

Macdonald has also built up an extensive operatic repertoire and is in demand in some of the world’s leading opera houses. Following his highly successful North American debut with the Canadian Opera Company, Macdonald made his US debut that autumn at Lyric Opera of Chicago, conducting a new production of A Midsummer Night’s Dream. Subsequent US debuts have included new productions of The Rape of Lucretia at Houston Grand Opera (where he returned for Carmen in 2014) and Die Zauberflöte at San Francisco Opera. In 2014 he made his debut at Santa Fé Opera conductingCarmen (where he will return in 2016/17).

In 2011 he conducted Il barbiere di Siviglia andHänsel und Gretel at the Royal Opera House, Covent Garden, where he has also conductedFidelio, Das Rheingold, Owen Wingrave, A Midsummer Night’s Dream and Orphée (Philip Glass) and opened English National Opera’s 2011/12 season with The Elixir of Love. In 2012, he conducted Delius A Village Romeo and Julietat Wexford Festival and The Cunning Little Vixen with the Bergen National Opera. In spring 2014 he conducted Britten The Turn of the Screw for the Vienna Konzerthaus with a cast including Mark Padmore.

Future operatic highlights include Die Zauberflöte with both Royal Danish Opera and the Lyric Opera of Chicago, Il barbiere di Siviglia with the Canadian Opera Company, and his debut with the Orchestra of Scottish Opera.

Rory Macdonald studied music at Cambridge University, and plays violin and piano. While at university he studied under David Zinman and Jorma Panula at the American Academy of Conducting in Aspen. After graduation from Cambridge he was appointed assistant conductor to Iván Fischer at the Budapest Festival Orchestra (2001-2003), and to Sir Mark Elder and the Hallé Orchestra (2006-2008). He was also a member of the Young Artists Programme at the Royal Opera House (2004-2006), where he worked closely with Antonio Pappano on major projects such as the complete Ring cycle, and conducted performances of several operas.