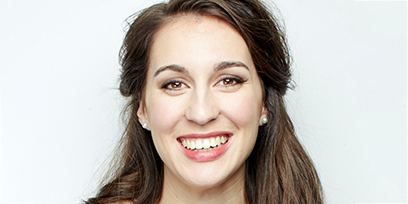 Mezzo soprano Shakira Tsindos holds a Bachelor of Music with Honours degree from the Melbourne Conservatorium of Music.

In 2016, Shakira was a Developing Artist with Victorian Opera, the recipient of the Joseph Sambrook Opera Scholarship with the Melba Opera Trust and a finalist in the Opera Scholars Australia (OSA) Scholar of the Year competition.

Last year, Shakira made her European debut with the Mediterranean Opera Festival (Sicily) in the role of Dorabella in Così Fan Tutte and was named the joint recipient of the 2017 Acclaim Awards Fellowship to pursue further studies in the Italian operatic repertoire with esteemed soprano Valeria Esposito in Jesi, Italy.

This year, Shakira joins the cast of Opera Australia’s By the Light of the Moon performing the role of Agatha the Cat following recent performances as Kate Pinkerton in Madama Butterfly for The Classics series.

In March 2018, Shakira returns to Victorian Opera as a member of their Young Artist Program, performing the role of the Possum in The Magic Pudding.

Further roles with Victorian Opera include; Dorothée in Cendrillon, Alisa in Lucia di Lammermoor, Mrs Mayor in The Pied Piper, Mum in The Grumpiest Boy in the World, Ministrel in Laughter and Tears (featuring Pagliacci), and Il Cucolo in La bella dormente nel bosco (The Sleeping Beauty).

Shakira has performed as the alto soloist in Haydn’s The Creation with the Melbourne Symphony Orchestra (MSO) conducted by Sir Andrew Davis, and the soloist in Hitchcock and Herrmann (MSO), Ravel’s Shéhérazade, Saint-Saens’ Christmas Oratorio, Lenthall’s Calls of War and Handel’s Messiah.

For three years, Shakira held a scholarship with OSA including the inaugural Peter Evans Scholarship in 2015. Performance highlights for OSA include the title role in Snow White and Other Grimm Tales, Carmen in Carmen in the Caves and performances at Opera in the Alps and Opera in the Market.