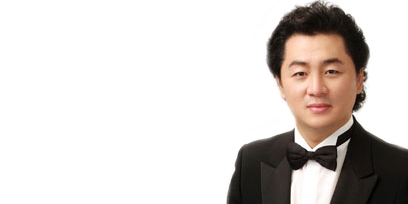 Simon Kim was born in Korea and graduated in voice from Kyung Hee University in 1992. He moved to Italy later that year and undertook postgraduate studies in Genoa, Perugia and at the Salzburg Mozarteum in Austria.

Whilst residing in Italy, Simon was successful in many vocal competitions and appeared as soloist in numerous concert performances around the country.  Upon his return to Korea in 2001, he undertook many of the leading tenor roles in the repertory include Ferrando in Così fan tutte, Nemorino in L’elisir d’amore, Alfredo in La traviata, Scorpio in La Pizza con Funghi and the title role in Werther.  Simon also sang major roles in professional productions of Korean operas – with these companies, he toured to China and Germany.

On the concert platform, he has sung with all the major Korean symphony orchestras as well as the Central Russia National Orchestra and the Ukraine Symphony Orchestra.  In 2008, Simon was invited to give a solo recital at the Russian National Art Academy in Vladivostok.

In 2009, he moved to Sydney, Australia and has become a principal artist with Opera Australia.  Some highlights of his time with OA have included singing the role of Macduff in Macbeth, Remendado in Carmen and covering Gustavus and The Duke in new productions of Un ballo in maschera and Rigoletto.

In 2015, Simon Kim sang Calaf in Turandot and The Herald in Don Carlos for Opera Australia.