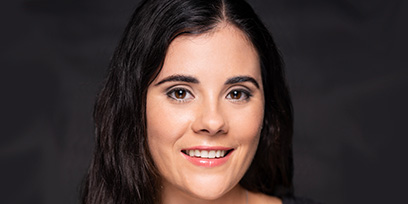 Sophie Salvesani is a young, upcoming Australia soprano who recently made her operatic and role debut as Violetta in La Traviata at the Sydney Opera House, performing four shows, including closing night, throughout July of 2022.

This follows both her professional and principal debut in 2019 as Maria in Opera Australia, GWB Entertainment and BB Group’s touring production of West Side Story, Sophie received praise from critics for her ability to “easily navigate the demands of the score” while ensuring “Maria’s journey from…dreamy lover to broken young woman is authentic as it is impactful” (Stage Whispers, Alex Armstrong 2019). This production saw her tour not only Australia, but New Zealand and Germany too, in which she debuted in some of Europe’s most prestigious opera houses, Semperoper (Dresen) and Staatsoper Unter den Linden (Berlin).

Since then, she played the role of Rosina in Opera Australia’s 2020 NSW School’s Tour of The Barber of Seville and was also selected as the recipient of the 2020 Australian Opera Awards Committee Dame Joan Sutherland Award. Following this, Sophie became a Principal Young Artist with Opera Australia, covering lead roles in The Merry Widow and La Juive, as well as performing in their Great Opera Hits concert series and amongst the ‘Field of Light’ in Uluru.

With the announcement of Opera Australia’s 2023 season, Sophie is thrilled to be making her role debut as Donna Anna in Don Giovanni, as well as covering the roles of Gilda in Rigoletto and Olympia in The Tales of Hoffmann.