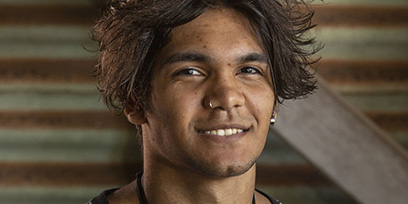 
At the tender age of nine Taj quickly embraced his artistic heritage playing guitar and moving on to the big stage in the Marrugeku Dance projects production titled Buru travelling to Arizona and Canada.


No stranger to film Taj has appeared in a number of tv commercials, the SBS production The Circuit and in 2014 starred in the short film High Tide written and directed by Dot and Kimberley West.


Taj wants to be known for his art and music and aspirers to perform around the world.