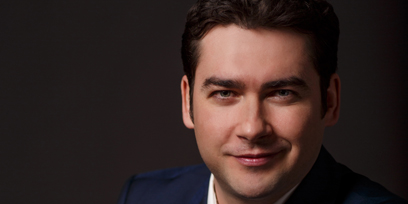 Since his professional debut in 2006 with the Bucharest National Opera, Romanian tenor Teodor Ilincăi has performed at some of the most important opera houses in the world, including the Royal Opera House – Covent Garden, Paris Opera, Deutsche Oper Berlin, Vienna State Opera, Teatro Real in Madrid, Bavarian State Opera, Opera di Genova, Opéra Municipal de Marseille, Théâtre du Capitole in Toulouse and Semperoper Dresden, amongst others.


Ilincăi’s engagements for the 2016/17 season include Pinkerton in Madama Butterfly at Covent Garden and the Berlin State Opera, Macduff in Macbeth at the Gran Teatre del Liceu, Cavaradossi in Tosca with Opera Australia, and the title role in Don Carlos at the Opéra Municipal de Marseille and Deutsche Oper Berlin.


In 2008, Ilincăi was invited by the Banatul Philharmonic in Timişoara to perform in Rossini’s Stabat Mater, making his debut in a vocal-symphonic work. That same year, he performed for the first time on the stage of the Romanian Athenaeum in Bucharest in Antonin Dvorak’s Requiem. Ilincăi’s international debut took place in January of 2009 on the stage of the Hamburg State Opera as MacDuff in Verdi’s Macbeth. In March, he made his debut at the Vienna State Opera as Ismaele in Verdi’s Nabucco and at the opera houses of Timişoara, Bucharest and Hannover as Rodolfo in La Boheme. In December, he made his debut at the Royal Opera House in London as Rodolfo under the stage direction of John Copley.


Teodor Ilincăi studied oboe in primary school in Suceava. After he graduated from Constantin Brâncoveanu high school in Bucharest in 2001 (with a major in Philology), his passion for music lead him to study musical pedagogy and byzantine music at the Bucharest Music Conservatory, from which he graduated in 2006. Ilincăi then became a principal singer with the Bucharest National Opera, where he sang his first major role: Ionică in Cornel Trăilescu’s Puss in Boots. That same year, he started perfecting his skills under Corneliu Fănăţeanu’s guidance and obtained a scholarship offered by CEE Musiktheater in Vienna. In 2008, Ilincăi came in First Place at the Great Tenors Tournament in Szczecin, Poland, and in 2010 he came in Second Place at the Francisco Viñas International Singing Competition in Barcelona. Ilincăi has also been granted numerous awards, including Soloist of the Year at the Bucharest VIP Gala Awards and the Ludovic Spiess Prize by the Romanian Music Forum (2009), the In Memoriam Iosif Sava distinction by Radio Romania Cultural (2010), and the Award of Excellence by Elite Art Club Unesco Romania for being a cultural ambassador for Romania all over the world (2013).