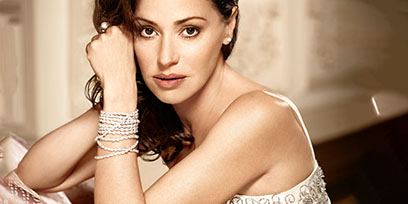 Tina Arena’s journey is the stuff of Australian music folklore, dating back to the mid-1970s when all of Australia knew her simply as "Tiny Tina", arguably the most popular singer in the country … by age nine! Tina’s debut studio recording, 1977’s Tiny Tina & Little John (co-starring John Bowles, her 12-year-old cohort from the legendary variety TV show Young Talent Time) had Tina belting out pitch-perfect covers of chart hits of the time such as ABBA’s 'Ring Ring' and 'When I Kissed The Teacher'.


Needless to say, generations of Australians have grown up with Tina Arena and her music ever since. The child star matured into one of our most successful singer/songwriters, the possessor of a voice for the ages, and she’s now a veteran with total album sales topping ten million.


Tina’s phenomenal recording career has produced hit after hit, from her earliest breakthrough singles, 1990’s 'I Need Your Body' and 'The Machine’s Breaking Down', through to the iconic songs that generations of Australians know off by heart — 'Chains', 'Sorrento Moon', 'Wasn’t It Good', 'Burn', 'If I Didn’t Love You, Symphony Of Life', 'Heaven Help My Heart' — as well as more recent classics, including 2013’s 'Only Lonely' and 'You Set Fire To My Life'.


Consider this: Tina Arena is the only Australian artist to earn a gold or platinum certification for original album releases, in every decade since the 1970s right through to today. In fact, every album in her career has gone gold, platinum or multi-platinum. Her 1994 album Don’t Ask remains one of the highest selling Australian albums of all time, currently certified 14 times platinum; and add to this her unprecedented success in France where she has sold five million albums there alone.


While Tina has always been forward-focused with her music and career, the 40-year milestone — alongside other recent awards and accolades such as 2015’s induction into the ARIA Hall of Fame and 2016’s Order of Australia medal — has forced Tina to pause and reflect. And looking back, Tina couldn’t be prouder of everything she’s survived and achieved thus far.


To celebrate the 40-year anniversary, Tina recently released a new musical collection titled Greatest Hits and Interpretations. Divided into two parts, the first, titled Retrospective, is all about the greatest hits, while on the second, titled Reimagine, Tina herself barely appears. Instead, she invited an eclectic collective of peers including Jimmy Barnes, Dannii Minogue, Jessica Mauboy and the Veronicas, and some of her favourite newcomers to reinterpret a selection of highlights from her career.


Throughout her stellar career, theatre has been a constant presence for Tina, having starred in productions in Australia and internationally. Her theatrical work includes Cabaret, Nine, Dynamite and Joseph and the Amazing Technicolour Dreamcoat. Now, after Tina wowed critics on the West End as Roxie Hart in Chicago, she is back with her most challenging theatrical project to date, Evita.