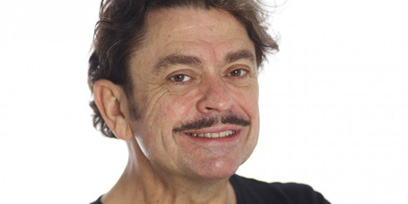 Gerry Connolly is an accomplished Australian comedian, actor, impressionist and pianist best known for his satirical caricatures of public figures. Anything Goes sees his return to the Frost fold since his hilarious portrayal of Marcus Lycus in A Funny Thing Happened on the Way to the Forum.

For half the reign of the present Queen, he has represented Her Majesty in the Southern Hemisphere and occasionally north of the Equator. This turn began life at the Queensland Conservatorium of Music in revue, and along with his rendition of Sir Joh Bjelke Petersen quickly became the basis of stage shows such as Men and Women of Australia, I CONnolly, Gerrymander Joh and the Last Crusade, Different Things and Pianomaniac.

Connolly is widely acclaimed across Australia as a comic and has had great success at the Melbourne, Sydney and Adelaide Comedy Festivals, as well as the Edinburgh Fringe Festival. In 2012 he brought his own brand of comic and classic taste to Richard Tognetti’s Festival Maribor in Slovenia.

Connolly has appeared in productions for the Melbourne Theatre Company including Cyrano de Bergerac, Tomfoolery, Urinetown, The Resistible Rise of Arturo Ui, Lady Windermere’s Fan and Little Murders; the Sydney Theatre Company (Summer Rain and Once in a Lifetime); Queensland Theatre Company (The Marriage of Figaro) and Essgee Productions (The Pirates of Penzance). 2013 saw his remarkable characterisation of Mrs Nelly Dean in shake & stir’s monumental staging of Wuthering Heights.

Ten years ago Gerry ran away with the circus in the form of La Clique in the first instance, and subsequently La Soiree. Incarnations in The Famous Spiegeltent and theatrical venues have taken him from Melbourne, Sydney, Adelaide, Darwin, Brisbane, Hobart, Auckland, London, Blackpool, Edinburgh and Paris.

He has meddled in television since The Gerry Connolly Show in 1988 via Fast Forward to play eccentric Headmaster Griffin in ABC’s Dead Gorgeous. Along the way, Connolly has surprised the likes of Bert Newton, Molly Meldrum and Brian Henderson in celebrity roasts, and guested on Kath and Kim 2 as Merrill Streep (no relation). Most recently Gerry filmed the role of Reginald Valpy in the ABC telemovie Mystery Of A Hansom Cab.

Gerry Connolly is in demand here and abroad for one-off appearances in character: launching a train, enlivening a corporate dinner, or opening an envelope. He peppers these vignettes with witty observations and real-time conversations with his disbelieving audience.