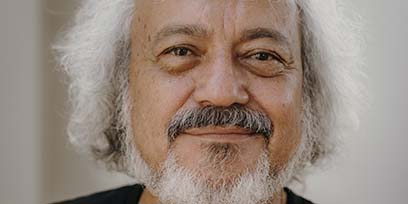 Patrick Bin Amat or ‘Duttoo’ as he is known, is a Yawuru man from Broome. He grew up playing music in the backyard with family and friends.

He is one of the original Kuckles band members and has played bass with them since 1980. They were the first Indigenous band to perform in Europe in Köln Liederfestival in West Germany in the early 80s. He worked with Jimmy Chi on the original music. Played in every performance of the Original Stage play and was also the Bass Player in the movie. Duttoo went to Centre For Aboriginal Studies and Music (CASM) in Adelaide in 1981–1982 to learn more about music and create music with Jimmy Chi and Kuckles. He performed in the 1992 Festival of the Arts at Rorotonga in the Cook Islands. He has made a number of recordings with Musicians throughout the Kimberley, including Corrugation Road, Didj’un and Stephen ‘Bammba’ Alberts Bard album. These days he plays at different events but mainly plays music for family and friends.