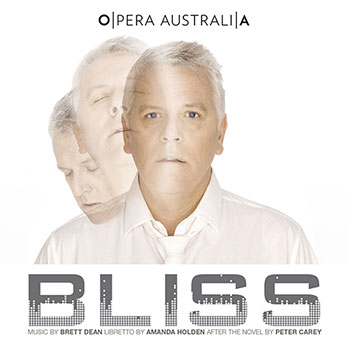 Bliss is the story of Harry Joy, the MD of an advertising company who returns to consciousness after a near-death experience – and sees his life in a new light. His wife is having an affair with his business partner; the company for which he works is selling cancer-inducing chemicals; his son (a drug dealer) and his daughter (a communist) are having an incestuous relationship. Harry escapes into the arms of Honey, a prostitute and healer, in whose company he eventually finds solace – but not before his family has self-destructed, in some cases quite literally.

The coruscating story of Bliss is brought to life in all its vivid and surreal reality by Amanda Holden’s libretto and Brett Dean’s score – resulting in one of the most engaging contemporary operas to emerge in recent years. This recording, made at the world-premiere season in Sydney prior to acclaimed performances throughout Europe, is made available here for the first time and is an indispensable record of one the most talked-about cultural events of our time. Peter Coleman-Wright stars as Harry Joy alongside a brilliant cast.

Music by Brett Dean; libretto by Amanda Holden; after the novel by Peter Carey.

Lorina Gore Honey B, his lover