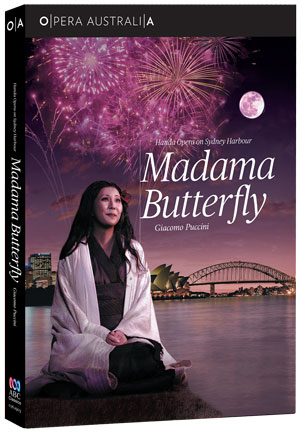 World-class opera in a spectacular setting: Puccini’s masterpiece is one of opera’s greatest tragic tales, with glorious music – including the ‘Humming Chorus’ and ‘Un bel dì’ – to match. But never before has it been so stunningly presented, with Sydney Harbour, the Opera House and the Harbour Bridge as a backdrop, brilliant fireworks illuminating the night sky and a lavish production directed by the renowned Àlex Ollé (La Fura dels Baus).

Hiromi Omura stars as Butterfly, the Japanese girl who marries a US naval officer while he is on shore leave. With their child she waits expectantly for his return – but when his ship finally arrives, he is accompanied by his new American wife. Stricken by grief, Butterfly commits suicide, choosing to die with honour rather than live with shame.

Relive the beauty and tragedy of Madama Butterfly, in all the splendour and elegance of Handa Opera on Sydney Harbour.

Sung in Italian with English, German and Spanish subtitles.