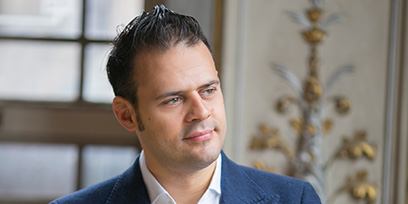 Andrea Sanguineti has been appointed Music Director of the Aalto-Musiktheater and the Essen Philharmonic Orchestra as of the 2023/24 season.

The current season includes a new production of Lucrezia Borgia at Aalto Theater Essen, the revival of Manon Lescaut at Deutsche Oper Berlin, Lucia di Lammermoor and an anniversary concert in occasion of 200 years Cologne Carnival at the Cologne Opera as well as the New Year’s Concert of the Württembergische Philharmonie Reutlingen. In addition, there are commitments for a new production at the Cologne Opera and the Opéra National du Rhin in Strasbourg.

Andrea Sanguineti is a conductor with charisma and great musicality. Since his debut with the Staatsorchester Hannover in 2008 he has been a regular guest at important opera houses and orchestras throughout Europe, where he conducted numerous new productions, revivals and concerts. Lately, he has joined Deutsche Oper am Rhein for La bohème, Theater Chemnitz for Fidelio, Opera Graz for Il trovatore, Landestheater Innsbruck for The Magic Flute, Teatro Massimo Catania for Merry Widow as well as Orchestre Symphonique de Mulhouse, RSO Radio Symphony Orchestra Vienna, Teatro Sao Carlos Lisboa, Opéra de Rouen, Kissinger Sommer and Beijing Music Festival for symphonic projects.

His vast repertoire starts with Viennese operetta and rangers from the Italian literature to German, French and contemporary music. In this connection, he worked with many renowned artists such as Maria Agresta, Annette Dasch, Bryan Hymel, Michael Spyres, Quinn Kelsey, Lucio Gallo, Franco Farina, Fabio Armiliato and Alexander Vinogradov.

Until the end of the 2017/18 season the Italian maestro held the position of Music Director of Theater Görlitz for five years. Before he had been Principal Conductor and Assistant Music Director at Mainfranken Theater Würzburg.