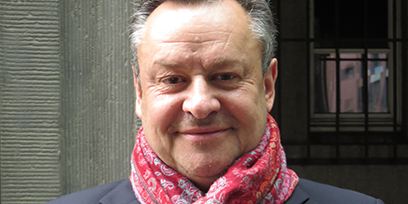 The internationally sought-after tenor Andreas Conrad has a large and very varied repertoire. In 2019/20 he sang roles like Der Bucklige in Die Frau ohne Schatten in a concert tour production of the Rotterdam Philharmonic Orchestra as well as Edmund in Aribert Reimann’s Lear at the Opéra National de Paris. At the beginning of the season, he sang the Police Inspector in Shostakovich’s The Nose at Hamburg State Opera.  As Mime in Der Ring des Nibelungen he could be heard at Grand Théâtre du Genève, at Bavarian State Opera, at New National Theatre in Tokyo and 2015 to 2017 at Bayreuth Festival in a production by Frank Castorf.

He appears regularly on the great stages of the world. Guest engagements have taken him as Buckliger to Salzburg Festival, as Herodes (Salome) to Opéra de Monte Carlo, to Vienna State Opera and to Opera House Sydney as well as to Komische Oper Berlin as Edmund. He performed at the Metropolitan Opera in New York as well as at the Washington National Opera and was Klaus Narr in the Chinese premiere of Schönberg’s Gurrelieder under Peter Ruszicka at the Symphony Hall Shanghai and the Poly Theatre Beijing as well as under the direction of Philippe Jordan in Paris.

In 2018 Andreas Conrad gave a guest performance of the roles of Lottery Agent and Olim in Kurt Weill’s Der Silbersee in Warsaw and sang the role of Bertholt Brecht in the premiere of Peter Ruzicka’s opera Benjamin at the Hamburg State Opera.

From 1984 to 2007 he was a member of the Komische Oper Berlin. In 1998 Andreas Conrad was appointed Berlin Kammersänger.

Season 2020/2021 include a return to Hamburg for The Nose and Siegfried-Mime in Madrid.