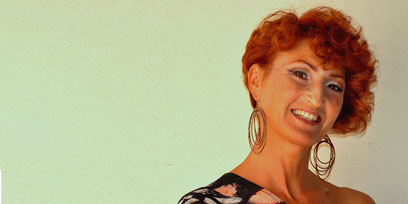 Barbara Staffolani was born in Macerata (Italy). She began her career as a dancer, starting from a classical background and moving towards modern jazz dance.

Those experiences made her so versatile in dancing and choreography. Her first performance as dancer was in the Messa Creola (1983) directed by Saverio Marconi; La Bohème (1984) by Ken Russel, Arena Sferisterio, Macerata, Turandot (1986) by Flavio Trevisan, Arena Sferisterio.

After her experiences with semi-professional theatre she moved her first step as a choreographer in the opera L’elisir d’amore (1994) by Renzo Giacchieri, at the Arena Sferisterio.

The production was such a big success that after two years it was presented again at the same opera house.

In 1997 she worked with the director Renzo Giacchieri as a choreographer and assistant director for the Nabucco at the Arena Sferisterio, Macerata. After two years she was on tour with the same production to the 5th Festival d’Opera di Avenches (Switzerland). She founded and directed the Association Mete Dinamiche, with the aim of setting-up theatrical shows with acting and dancing. Through it, her experience in direction started and has continued putting on 18 works from 1993 to 2010. She has continued at the Arena di Verona, where she has worked for 16 years at its summer festival, as assistant and revival director for official operas. She supported in the staging in Arena, among the others, the directors: Zeffirelli, De Ana, Vick, Pizzi, Alexandrov. She was resident director with responsibility for the director’s office of the Teatro Filarmonico for the winter season 2002–2003.

In September 2005 she made her debut as director in La Bohème during the 1st Festival Lirico di Pegognaga, and she received critical and public accolade. L’Opera magazine n°198 of October 2005 wrote: ”lo spettacolo di Barbara Staffolani ,regia, riservava piacevoli sorprese e si raccomandava per scorrevolezza e pulizia” (“the spectacle of Barbara Staffolani, director, had a pleasant surprise in store and was recommended for flow and clarity”).

In November 2006 she was co-assistant and choreographer for Maestro Giacchieri for the production of Rigoletto at the Teatro Verdi, Trieste.

Later in 2007 after setting-up the Barbiere di Siviglia at the Arena di Verona, directed by Maestro Hugo de Ana, she co-assisted the director in the following productions of Tosca at the Teatro Verdi in Padova and at the Teatro Verdi in Salerno and Szenen aus Goethe Faust at the Teatro Regio in Parma. In February 2011 she worked with Maestro Fabio Sparvoli setting up the Les Pecheurs de perles at the Teatro Filarmonico in Verona. As first assistant director she set up Turandot, directed by Franco Zeffirelli for the official opening of the Royal Opera House in Muscat (Oman). In October 2013 she looked after a new Nabucco staging like coworker director with M° Renzo Giacchieri at the Teatro Verdi in Salerno. In November 2013 she started the collaboration with Giancarlo Del Monaco with whom she staged L’Italiana in Algeri at the NCPA in Beijing ( China), and Luisa Miller at Opèra de Lausanne. She will remake the show with Opera Australia this year.