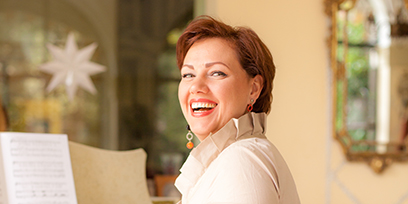 Mezzosoprano Carmen Topciu, born in Cluj-Napoca (Romania), graduated in singing at the Conservatoire of Music and Drama Art ‘’Gheorghe Dima’’ and debuted in Romania in 2006 as Rosina in Il Barbiere di Siviglia by Rossini. Carmen Topciu won many competitions, amongst other ‘’Hariclea Darclee’’ in Romania and As.Li.Co. in Italy for Angelina rola in La Cenerentola by Rossini. Her debut in Italy was in 2011 in La Cenerentola production tour for the theatres in Lombardia province Teatro Grande in Brescia, Fraschini in Pavia, Ponchielli in Cremona, Sociale in Como and also Municipale in Piacenza. In 2012- 2013 season she comes back to Italy for L’Italiana in Algeri by Rossini through the same tour in Lombardia theatres and Teatro Alighieri in Ravenna.

Other important debuts: Teatro San Carlo in Naples season 2011-2012 in Carmen by Bizet, and straight after it in Semiramide di Rossini; Arena di Verona in Carmen by Bizet in 2016 and during the same year as Santuzza at Teatro Comunale in Bologna. In 2017 she returned to Arena di Verona as Carmen and Amneris; during the same year she san gas Azucena in Trovatore in Essen, Carmen in Shangai and Trovatore in Bari. She recently sang in Turin in a new production of Rigoletto under the baton of Maestro Renato Palumbo and the direction of John Turturro.

Carmen Topciu has been greatly acclaimed by the critique for her recent performance in the new production of Anna Bolena at the Sydney Opera House, directed by David Livermore, under the baton of Maestro Renato Palumbo.