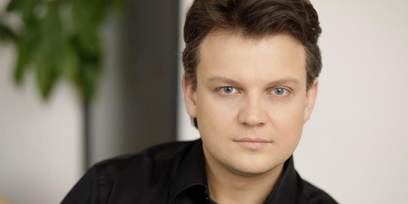 Ukrainian tenor Dmytro Popov completed his musical studies in Kiev and made his operatic debut at the National Theatre in Kiev as Lensky in Eugene Onegin.


In Kiev, he also sang his first performances of Riccardo in Un ballo in maschera, Enzo in La Gioconda, Alfredo in La Traviata and the Duke in Rigoletto. Popov made his international debut in 2004 as Alfredo (La Traviata) in a production by Jonathan Miller in Norway.  He then appeared in several roles with the Latvian National Opera such as Nemorino in L'elisir d'amore and the Prince in Rusalka. Popov made his Italian debut at the Teatro Regio in Turin as Nicias in Thaïs under Gianandrea Noseda. In 2009 he made his début as Pinkerton (Madama Butterfly) at the Deutsche Oper Berlin and has since returned there as Cavaradossi in Tosca and Rodolfo in Luisa Miller. In 2009 he also joined the ensemble of the Stuttgart Opera where he appeared as Edgardo in Luisa Miller, and as the Chevalier in Poulenc's Dialogues des Carmelites.

In 2011 Popov made several significant debuts; at the Royal Opera House Covent Garden as Lykov in the new production of Rimsky-Korsakov’s Tsarskoye nevesta (The Tsar’s Bride), at the Bavarian State Opera in Rusalka, and at the Teatro Real in Madrid as Vaudemont in Peter Sellar's new staging of Tchaikovsky's Iolanta under Teodor Courentzis. In February of 2012 Popov debuted with L'Opera de Monte Carlo as Andrei in Tchaikovsky's Mazeppa, and then was heard at  the Festival de Radio France in Montpellier in the summer of 2012 in a concert performance of Glinka' A Life for the Tsar. Dmytro Popov began the current season with his debut at the Opera de Lyon as Macduff in Macbeth. He returned to the Royal Opera Covent Garden for his first Rodolfo in La bohème, a perrformance which was also shown in cinemas worldwide. In February of 2013 he made his debut at the Mariinsky Theater in St. Petersburg in La Traviata under Valery Gergiev.

He made his Opera Australia debut and also role debut with Don José in Carmen — Handa Opera on Sydney Harbour in 2013. Popov frequently appears as soloist with orchestra and has sung Rachmaninov’s The Bells with the Accademia Nazionale di Santa Cecilia in Rome under the direction of Antonio Pappano as well as with the Russian National Orchestra under Mstislav Rostropovich. He appeared at the 2013 Tanglewood Festival in Verdi's Requiem with the Boston Symphony Orchestar under Andris Nelsons.