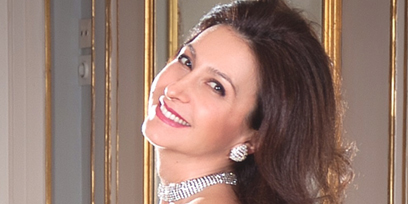 Dragana Radakovic was born in Novi Sad (the Republic of Serbia). She graduated and received her master’s degree from two departments at the Faculty of Music in Belgrade: Vocal Arts in the class of Professor Radmila Bakočević and Conducting in the class of Professor Stanko Šepić. She continued her professional development in Italy by attending master classes with famous sopranos: Renata Scotto, Mirella Freni, Magda Olivero and Bruna Baglioni. The most important and final contribution to her development was made by Professor Nikola Mitić.

During her studies, she had the opportunity to sing in the National Theatre in Belgrade in the following roles: Musetta (La Bohème), Cherubino and Contessa (Le nozze di Figaro), Mary Warren (Witches from Salem).

Since March 2002 she has sung the role of Abigaille (Nabucco) in two productions at the National Theatre in Belgrade (2002 and 2007).

She appeared in the role of Rosalinde (Die Fledermaus) at the Serbian National Theatre in Novi Sad over three seasons, from 2004 to 2007.

She made her debut as Odabella (Attila) at the Slovenian National Theatre in Maribor and at the International Festival in Ljubljana (Cankarijev dom) in the 2005/06 season directed by Plamen Kartalov.

In the same year, she appeared for the first time in the role of Marguerite (Faust) at the Slovenian National Theatre in Maribor, and at the International Festival in Ljubljana (Cankarijev dom), as well as at the Summer Festival in Oderzo, Italy.

In 2008, in a concert dedicated to Puccini in the Palas del Art, Valencia, Spain, she performed with Juan Pons, Mariella Devia, Daniela Barcelona and the great maestro Placido Domingo.

She appeared as Leonora in a new production of La forza del destino at the National Theatre in Belgrade in the 2009/10 season.

In 2009, she appeared for the first time in Romania in the role of Abigaille (Nabucco) at the Romanian National Opera in Timisoara. Since then, she has been a regular guest of that opera house singing the roles of Abigaille, Tosca, Aida, Adriana Lecouvreur and Donna Anna.

In January 2012, she was hosted for the first time by the Croatian National Theatre in Osijek as Abigaille (Nabucco). In February of the same year she made her debut with the role of Donna Anna (Don Giovanni) at the Romanian National Opera in Timisoara, followed by appearances in Germany in the same role at theatres in Munich, Dortmund, Wolfsburg, Saarbrucken and Frankfurt.

Since March 2012 she has worked with the Romanian National Opera in Constanta, Romania, singing the roles of Abigaille, Tosca and Aida, being also a guest at international festivals in Romania, Timisoara, Sibiu, Constanta and Hunedoara with the forementioned roles.

She gave notable concerts in the Netherlands and Belgium: Tilburg Concertzaal Muzik Theater in Brugge, Chasse Theater in Breda and Anton Philipszaal in the Hague.

In February 2013, she cooperated with Zurich Kammerphilharmonie for a concert dedicated to the 200th anniversary of the birth of Giuseppi Verdi.

2014 was a very successful year for Dragana Radakovic, aside from roles like Aida, Abigaille, Tosca, Leonora, Donna Anna, she had the opportunity to sing at the Summer Festival in Schwerin, Germany where she had excellent success with role of Abigaille (Nabucco). In October 2014 she opened a new season with Cairo Opera, Egypt as Aida (Aida). In November she debuted in role of Turandot in Timisoara (Romania), and thanks to a great success in the role she had the opportunity also to sing the same role at Opera Nationala in Cluj-Napoca.

In March 2015 she sang the role of Donna Anna in Don Giovanni in new production in HNK Osijek, Croatia. In May with the Cairo Opera Company she sang the role of Leonora in Il Trovatore where she received excellent reviews. In August 2015, she sang Turandot in Timisoara at the International Festival of Opera and in September she had an opportunity to sing for the first time in Moldavia in the role of Desdemona in Otello at Festival Maria Bieshu. In October 2015 she performed in her sixth production of Tosca in HNK Osijek, Croatia.

In March and April 2016 Dragana Radakovic will make her debut with Opera Australia in Sydney in the title role of Turandot.