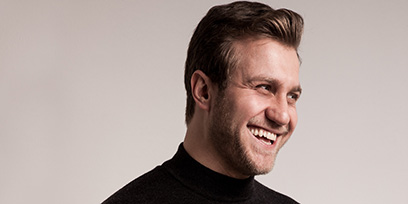 Ernesto Petti was born in 1986 in Salerno. He graduated from the Accademia di Alto Perfezionamento Torre del Lago Puccini.  He was a member of the Centre Perfeccionamento Placido Domingo at Palau de les Arts in Valencia.

He made his early debut as ‘Eagro’ in Gluck’s Orfeo ed Euridice at the Festival Valle d’Itria in Martina Franca, followed by Dancaire in Carmen at the San Carlo in Napoli before making his debut at very young age as Giorgio Germont in La Traviata in Lecce.

Among his recent and future schedule it is worth mentioning: the role of David il Rabbino in Mascagni’s L’Amico Fritz in Piacenza staged by Leo Nucci and conducted by Donato Renzetti, Giorgio Germont in La Traviata at the Teatro Lirico Cagliari, at Grand Théâtre de Avignon and touring in Italy, Renato in Un Ballo in Maschera at NCPA in Beijing and in Piacenza, Ravenna and Ferrara, Enrico in Lucia di Lammermoor at  Teatro Petruzzelli in Bari, in a new production at Stadtheater Basel nd in Palermo,  Paolo in Simon Boccanegra at the Concertgebouw in Amsterdam, Carlo Gérard in Andrea Chénier at Teatro Alighieri in Ravenna, Conte di Luna in Verdi’s Il Trovatore, Marcello in La Bohème and Ford in Falstaff at Teatro Petruzzelli in Bari, the role debut of Kyoto in Mascagni’s Iris at Kozerthaus in Berlin, the role debut of Alfio in Cavalleria Rusticana at Teatro Massimo in Palermo, the role debut of Carlo in Verdi’s Ernani in Piacenza and at Vlamsee Oper, the role debut of the High Priest of Dagon in a new production of Samson et Dalila at Teatro San Carlo in Napoli, Lucia di Lammermoor at the Deutsche Oper Berlin, Nabucco in Oviedo and at the Staatstheater Mainz