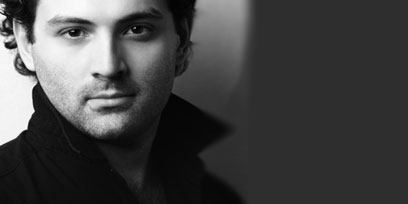 Tenor Georgy Vasiliev is a soloist of The Kolobov Novaya Opera Theatre of Moscow (the New Opera), where he made his debut in the part of Ismaele in Nabucco in 2010. In recent seasons he has begun to establish himself outside of his native land and has debuted at the Deutsche Oper Berlin as Edgardo in Lucia di Lammermoor,  the role also of his North American stage debut with the Palm Beach Opera, and at the Baltimore Opera as  Rodolfo in La bohème. In the spring of 2013 the artist made his debut in France as Vaudemont in Tchaikovsky’s Iolanta in Metz and Nancy. In December of 2013 Vasiliev will return to the Deutsche Oper Berlin as Alfredo in La Traviata. In February of 2014 he will also make his debut at the Bolshoi Opera in Moscow in Iolanta.


Georgy Vasiliev originally completed his studies as a choral conductor at the prestigious Academy of Choral Art in Moscow,  before turning his attention to vocal studies.  Since his debut at the Novaya Opera, he has been heard in several roles including Lensky in Eugene Onegin, Vladimir in Prince Igor, Mihailo in The Maid of Pskov, and as Flamand in Strauss’s Capriccio in the production which marked the premiere of this work in Russia.


Mr. Vasiliev has also participated in international festivals in Moscow, Istanbul , andSan Sebastian (with the RNO orchestra (Pletnev), performing as the tenor soloist in Bruckner's Te Deum, and Rachmaninov’s The Bells. He also dang Verdi’s Requiem in Mexico City.


Other roles in his developing repertoire include the Duke in Rigoletto, Des Grieux in  Massenet’s Manon and Romeo in  Gounod’s Romeo et Juliette.