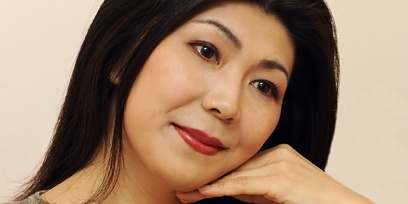 Hiromi Omura’s triumph as Cio-Cio-San (Madama Butterfly) in Sydney and Melbourne at the end of 2012, is only the most recent of the accolades accorded this young artist whose voice is “powerful, seamless and exquisitely beautiful” (North Shore Times) with her “untypical ability to sing pianissimo all the way up to the top of her register” (Criky.com), and whose dramatic power can yield “a performance of extraordinary emotional intensity” (TheAge.com).


Although her Cio-Cio-San has been her visiting card since the beginning of her career, with numerous productions around the world (Deutsche Oper Berlin, Israel Opera, Opéra de Montréal, Malaga, Santander, Cordoba and Gijon; Savonlinna Opera Festival, Finland, Opéra de Lausanne and Warsaw Polish National Opera), Hiromi Omura has firmly established a reputation as a Verdi soprano, and has been especially acclaimed as Desdemona (Otello, Opéra National de Lorraine, 2010; Opéra de Toulon, 2012), Leonora (Il Trovatore, Opéra de Montréal 2012), Amelia (Simon Boccanegra, Montréal 2010) and Elisabetta (Don Carlo, Tokyo 2006) and Violetta (La Traviata, Tokyo 2003). The addition of the extremely demanding role of Norma to her repertoire in 2011, in Lausanne, “Impeccably sung on the breath, with  a legato in the finest tradition…Flashing out easy top C’s” (Opéra Magazine) was the perfect vehicle for the vocal breadth, extension, agility, power and delicacy that characterise Hiromi Omura’s talent.


Hiromi was born in Tokyo, Japan, and studied violin before starting her vocal studies. After obtaining her Bachelor’s Degree and Master of Arts in singing at the Tokyo National University of Fine Arts and Music, she moved to Italy, training in Mantua and Milan for four years. She then transferred to France to join the Opera Studio CNIPAL in Marseille (2000’2001).


In these formative years Hiromi was a prizewinner in several international competitions:


From 2002, Hiromi’s career took off with major roles in Tokyo: La Contessa (Le Nozze di Figaro) and Violetta (La TraviataBerlioz, Béatrice et Bénédicte) at the Opéra Comique, Paris, directed by Régine Crespin. In 2004, Hiromi debuted at the New National Theatre, Tokyo, as Micaela (Carmen), and sung her first Cio-Cio-San in Amiens, conducted by Pascal Verrot and directed by Jean-François Sivadier. She repeated this role in Tokyo the following year (in a new production directed by Tamiya Kuriyama and conducted by Renato Palumbo), and for the Opéra de Metz, conducted by Alain Guingal, directed by Numa Sadoul.


2006 took Hiromi again to the New National Theatre Tokyo, this time for Elisabetta in Don Carlo, in a new production by Marco Arturo Marelli, and for Nedda in I Pagliacci, conducted by Fabio Luisi.


In 2007, Tokyo heard her as Micaela, and she sang Silvia in Mascagni’s Zanetto for the Opéra National de Lorraine. As well as her many performances in Madama Butterfly, more recent years have seen the addition of the Verdi roles: Amelia in Montréal, and Desdemona at the Opéra National de Lorraine, where she also sang La Contessa in Nozze di Figaro (2010). The following season Montréal again welcomed her, this time for Leonora in Trovatore. Her Desdemona was heard again in 2012 at the Opéra de Toulon. Audiences and press alike have recognised and applauded her exceptional affinity for this repertoire.


Hiromi’s recent successes in Australia have been crowned with the issue of a DVD of the Opera Australia production of Madama Butterfly, and the opera’s distribution for cinema in the United Kingdom, Ireland, Australia, New Zealand, Spain, Germany, the United States and South Africa. It will soon be distributed in Asia, Canada etc.


Hiromi Omura is resident in France.