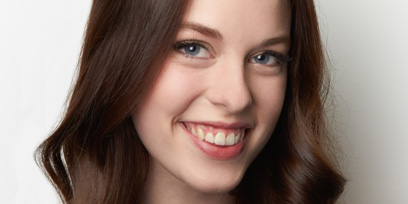 Originally from Hobart, Imogen commenced her dance training at age seven and voice study at ten. She moved to Melbourne to attend the Victorian College of the Arts and recently graduated with a Bachelor of Fine Arts (Music Theatre) in 2014. At VCA, she was the recipient of the Cassidy Bequest Scholarship.


In her third year at VCA, Imogen played Daisy Mae in Li’l Abner (directed by Martin Croft), Aunt Alice in James Millar and Peter Rutherford’s A Little Touch of Chaos (directed by Iain Sinclair), and La Fleur in Nine (directed by Sally Bourne). Also at VCA, Imogen appeared as Dream Laurey in Oklahoma! (directed by Gary Young) and Cathy Doyle in Summer Rain by Nick Enright and Terence Clarke (directed by Nancye Hayes OAM). In 2015 Imogen will appear in Trifle Theatre Company’s inaugural production of Avenue Q at Chapel off Chapel, as a part of the Melbourne International Comedy Festival.


Imogen would like to thank her supportive family, friends, mentors, and Ian White Management for their unwavering encouragement, guidance and belief in her and her dreams. She is very excited to be making her professional debut in Anything Goes with such an outstanding cast and creative team. She would also like to thank The Gordon Frost Organisation and Opera Australia for this opportunity. Imogen is a proud member of Actors’ Equity.