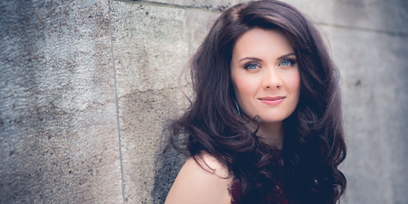 Romanian Soprano Iulia Maria Dan graduated from the National University of Music in Bucharest as a student of Maria Slatinaru-Nistor. In 2011, she became a member of the Opernstudio of the Bayerische Staatsoper in Munich, where she was also a member of the Ensemble. In August of 2015, Ms. Dan became a member of the Ensemble at Staatsoper Hamburg. Her engagements there for the 2017/18 season include Agathe in Der Freischütz, Mimì in La Bohème, Tatyana in Eugene Onegin, and Freia in Das Rheingold. Ms. Dan will also make her debut with Opera Australia this season as Mimì.


Engagements at the Staatsoper Hamburg from the 2016/17 season included First Lady in a new production of Die Zauberlföte, Contessa di Almaviva in Le Nozze di Figaro, Helena in A Midsummer Night’s Dream, Mathilde in Guillaume Tell, and Mimi. In the 2015/16 season, Ms. Dan sang Contessa di Almaviva, Rosalinde in Die Fledermaus, Fiodiligi in Cosi fan tutte, Tatyana in Eugene Onegin and Agathe in Der Freischütz, all at the Staatsoper Hamburg. She also sang Ofelia in Franco Faccio’s Amleto at the Bregenz Festival in Austria. In the 2014/15 season, Ms. Dan made a successful debut as the title role in Massenet’s Manon at Oper Graz in Austria. She also sang Waldvogel in Siegfried at the Bayerische Staatsoper and premiered Francesca da Rimini, music by Stefan Wirth, at the Münchner Opernfestspiele. In August of 2014, Ms. Dan sang Aminta in Il re pastore at the Verbier Festival in Switzerland, an appearance received with great reviews. In the 2013/2014 season, as a member of the Ensemble at the Bayerische Staatsoper, she sang Frasquita in Carmen, Giannetta in L’elisir d’amore, La contessa di Ceprano in Rigoletto, and Dama di Lady Macbeth in Verdi’s Macbeth. Ms. Dan’s 2012/13 engagements at the Bayerische Staatsoper included Hilda Mack in Hans Werner Henze’s Elegie für junge Liebende, Jano in Janáček’s Jenufa, Papagena in Die Zauberlföte, and Füchslein Schlaukopf in Janáček’s The Cunning Little Vixen.


Iulia Maria Dan has performed in concerts in Bucharest, Modena, Gdansk, Milan and Munich. In 2010, she sang the soprano solo in the world premiere of acclaimed Romanian composer Felicia Donceanu’s Salbe – Monodrama for Soprano and Orchestra at the Bucharest Radio Hall. In 2011, Ms. Dan debuted with great success as Gilda in Rigoletto at the Romanian National Opera. That same year, she received a Special Award for Most Promising Young Artist at the renowned Hans Gabor Belvedere International Singing Competition in Vienna, where she was also awarded the Graz Opera Special Prize and the Soroptimist Prize.