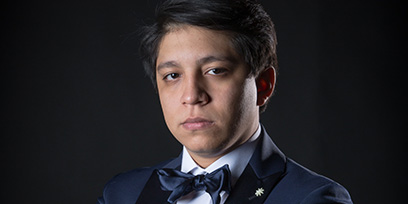 Iván Ayón Rivas was born in 1993 in Perù. He studied opera under the tutelage of María Eloisa Aguirre at the National Conservatory of Music of Perù. He pursued his studies with Juan Diego Florez, Ernesto Palacio, Vincenzo Scalera, Maurizio Colaccichi and Luigi Alva.

He is currently studying in Italy with baritone Roberto Servile.

In 2013 he won the second prize at the Peruvian National competition for Opera Singers, and in 2014 he sang in many solo recitals in Perù.

In November 2014 he made his debut in Ludwigshafen/BASF in a Gala with Orchestra Filarmonica della Scala, in the benefit concert of Juan Diego Florez, under the baton of Fabio Luisi.

In November 2015 he won the third edition of the Concorso Internazionale di Canto “Premio Etta Limiti”.

He sang in Mercadante’s Francesca Rimini at the Festival della Valle d’Itria in Martina Franca conducted by Fabio Luisi, where he came back the following year in Un giorno di regno.

Among his recent and future engagements: La Traviata n Venice, Rimini, Florence, Rome, Falstaff in Turin, L’Arlesiana in Berlin, Il Corsaro in Piacenza, I Capuleti e i Montecchi in Rome, La Bohème in Moscow, at the Teatro Regio in Turin, at La Fenice, in Rome and at the Puccini Festival in Torre del Lago, L’elisir d’amore in Las Palmas and Bari, Rigoletto in Florence under the baton of Fabio Luisi, in Turin and in Palermo directed by John Turturro, in Rome under Daniele Gatti, in Venice, Tokyo and in Liège, L’elisir d’amore in Bari and Las Palmas, La Rondine at the Festival Puccini in Torre del lago, Don Pasquale and Gianni Schicchi at the Liceu in Barcelona, Eugene Onegin at the Wiener Staatsoper, Faust in Venice, Les contes d’Hoffmann in Sydney and his debut with Macbeth at la Scala.

He is the winner of the First Prize, the Don Plácido Domingo Ferrer Prize of Zarzuela ed the Rolex Prize of the Audience at the Operalia Competition 2021.