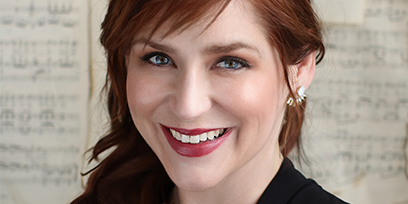 Lyric soprano Jennifer Black is “gleaming and glorious, with wonderful nuances of light and shade and complete dynamic control,” (Santa Fe New Mexican) and is in high demand on international opera and concert stages. Recently, she dazzled audiences in her show-stopping performance as Lida in La Battaglia Di Legnano with Sarasota Opera, for which critics hailed “Jennifer Black, as Lida…is a brilliant soprano with a cutting but beautiful voice and the air of a leader’s wife.” Black will recently returned to the Metropolitan Opera for their production of Gianni Schicchi and made her debut with Opera Australia in Il Viaggio a Reims in 2019.

Last season, Jennifer Black returned to Sarasota Opera to perform the role of Adalgisa in their production of Bellini’s Norma and reprised the role Mimì in La Bohème with Utah Opera. In recent seasons, Ms. Black has performed Countess in La Mere Coupable with On Site Opera, Violetta in La Traviata with Sacramento Philharmonic, sang the soprano solo in Mozart’s Coronation Mass with Mid-America Productions at Carnegie Hall and performed Beethoven’s Symphony No. 9 with Phoenix Symphony and Albany Symphony.

Having graced some of the finest opera stages around the globe, favorite engagements for Ms. Black include Adina in L’Elisir d’Amore with the Teatro Municipal in Santiago, Chile; a role debut of Norina in Don Pasquale as well as Musetta in La Bohème with Théâtre du Capitole de Toulouse; Mimì in La Bohème in her Seattle Opera debut; her Los Angeles Opera debut in new production of Il Trittico; her role debut as Desdemona in Otello and Juliette in Roméo et Juliette with Arizona Opera; and Bea in Jake Heggie’s Three Decembers with Atlanta Opera. She also performed and thrilled audiences as Donna Elvira in Don Giovanni and as Elle in the one-woman production La Voix Humaine for the Castleton Festival under the baton of Maestro Lorin Maazel.

Of Ms. Black’s performance as Violetta in La Traviata with Opera Carolina, critics hailed that she “was an outstanding Violetta with the perfect blend of vocalism and acting,” (Classical Voice of North Carolina), and she later went on to perform the role with Nashville Opera. With Santa Fe Opera, she made her debut as Micaëla in Carmen, and has since returned for role debuts as Mimì in La Bohème and Adina in L’Elisir d’Amore. With the former New York City Opera, she made her company début as Musetta in La Bohème, and subsequently returned as Micaëla in Carmen, both at Lincoln Center.

Noted concert engagements include Amanda in Ligeti’s Le Grand Macabre with the New York Philharmonic, Musetta in La Bohème with the Munich Philharmonic, Donna Elvira in Don Giovanni with Baltimore Symphony and was presented in recital by the George London Foundation at the Morgan Library in NYC.