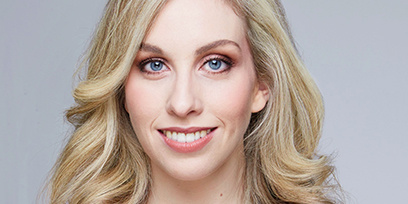 Kate Amos is fast becoming one of Australia’s most artistically versatile and highly sought-after young sopranos.

Born in Melbourne, Kate holds a Bachelor of Music (Performance) with Honours, Diploma in Languages (Italian) and Masters of Music (Opera Performance) from The University of Melbourne. She also holds an Advanced Masters in Opera from the Welsh International Academy of Voice, Cardiff studying under the tutelage of renowned international tenor Dennis O’Neill.

In 2019, Kate was delighted to make her Principal Artist main-stage debut with Opera Australia as “Arkie Whiteley” in Whiteley.

Kate was selected to join the Young Artist Program with Victorian Opera in 2014 performing leading and supporting roles and has gone on to become an artist who showcases unique vocal versatility in a wide range of musical styles, her repertoire spanning the varying genres of opera, operetta, music theatre and song.

In 2016, Kate performed the title role in Massenet’s Cendrillon, covered soprano Emma Mathews as Orlando/Selena in premiere baroque pastiche opera; Voyage to the Moon and study-covered the title role in Lucia di Lammermoor with Victorian Opera, sung by Jessica Pratt.

Making her debut with the Sydney Symphony Orchestra in 2016, Kate performed the Fauré Requiem at Sydney’s City Recital Hall, and portrayed Milly in the Australian premiere of Williamson’s Our Man in Havana with Lyric Opera of Melbourne, for which she was awarded “Best Actress in a Supporting Role in an Opera” by The Australian and Opera Chaser critic; Paul Selar.

Chosen as a finalist in the Australian Singing Competition (2014), Kate sang with the AOBO in Sydney, conducted by Johannes Fritzsch winning several distinguished prizes including UK Royal Overseas-League Bursary and Italian Merenda Scholarship. Kate travelled on scholarship to Italy after winning the Italian Acclaim study-prize in conjunction with Teatro Pergolesi, and was invited to undertake a bursary personally sponsored by soprano Jessica Pratt to attend the annual “Bel Canto Festival” in Montisi, 2017.

Recent engagements include: Melbourne Male Welsh Choir Concert as guest artist alongside Teddy Tahu Rhodes at the Melbourne Recital Centre, The Cat and Queen of Hearts/Mary Contrary/The Spider in ‘By The Light of the Moon’ with OA Vic Schools Company (2018).