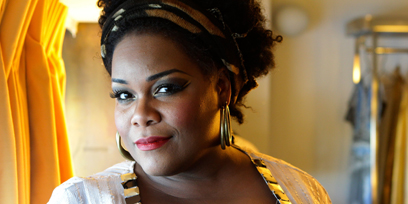 
Particularly associated with this role, she has gone on to sing Aida with great success at Covent Garden; the Opernhaus Zurich; Opera Australia; the New National Theatre in Tokyo; the Dallas, San Diego, Cincinnati, Pittsburgh and Detroit Operas and at the Ravinia Festival with the Chicago Symphony Orchestra under James Conlon.


She has also sung Vivetta L’Arlesiana and Fidelia Edgar in Carnegie Hall with the Opera Orchestra of New York; Elvira Ernani at the Basilica of St. Francisco d’Assisi in Trieste; Aida with the Minnesota Orchestra under Andrew Litton; Nedda I Pagliacci in a gala concert at La Monnaie, Brussels and Bess Porgy and Bess with the Berlin Philharmonic Orchestra under Rattle.


Highlights on the concert platform have included Mahler’s Symphony No. 2 with the Cincinnati Symphony Orchestra and Paavo Järvi; Verdi’s Requiem for the Teatro Verdi in Trieste with Daniel Oren, in Milan in the Sant’ Ambrogio Cathedral with Lorin Maazel and in staged performances for the Opéra de Québec; Nathaniel Dett’s The Ordering of Moses in Carnegie Hall with the Cincinnati Symphony Orchestra and James Conlon and Mahler’s Symphony No. 4 at the Festival de Paques de Deauville France, broadcast on TV.


Latonia Moore has recorded the role of Lady Macbeth Macbeth with Edward Gardner for Chandos and Mahler’s Symphony No. 2 with the Vienna Philharmonic and Gilbert Kaplan for Deutsche Grammophon.


Her many awards include the Maria Callas award as debut artist of the season at the Dallas Opera; The Richard Tucker Foundation Grant (2005), first prize at the Marseilles Competition and the public recognition prize (2003), first prize and the public’s prize in the International Competition dell'Opera, Dresden (2002) and the 2002 winner of the Metropolitan Opera’s National Auditions.