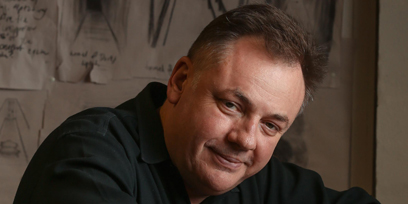 Art and education were the mainstays of Michael’s upbringing, with an architect father who was also a painter and lover of poetry, and a mother who was a lecturer in children’s literature and a musician, librettist and writer. Intellectual and artistic pursuits were prized above all. His career has been based upon the synergy between artistic pursuit as a practitioner and a passion for passing on the knowledge gained through his practice. The collaborative nature of the performing arts has proved to be fertile ground for nurturing these passions.

Building upon these formative influences, Michael has established himself as a formidable force within the arts in Australia as well as internationally, designing a raft of highly acclaimed productions and events across a broad spectrum of theatrical and architectural genres: drama, opera, musicals, dance, Olympic and National Ceremonies, restaurants, hotels, exhibitions, film and television. He is also a highly regarded educator, holding significant teaching and academic positions.

After studying architecture at Sydney University he received a Bachelor of Dramatic Art – Design from NIDA. Shortly after graduating Michael was invited by the inaugural Sydney Theatre Company (STC) Artistic Director, Richard Wherrett to design for the STC. Richard and Michael formed a strong artistic bond and collaborated on many productions together over the next 18 years. There have been a number of mentors whose collective influence has been profound – Roderick Bowie, Michael’s drama teacher at Barker College, Robin Lovejoy, Head of Design during Michael’s NIDA education, Ruth Cracknell, Richard Gill, Brian Thompson, Jim Sharman and John Bell. With the benefit of hindsight, Richard Wherrett proved to be one of Michael’s most influential mentors; he provided insight into the role of mentor/established artist and ‘novice’. This revelation has had a profound affect on Michael’s engagement with pedagogy and how best to support emerging artists.

Michael has continued to collaborate with each of STC’s Artistic Directors, designing 35 productions for the company to date, most recently Arcadia, Arms and the Man, Switzerland and Storm Boy.

As he was emerging as a designer of note in the performing arts, Michael began looking for a means to further explore the synergy between his architectural and theatre training. At the age of 27, he became a founding director of the design firm D4DESIGN, formed in 1987 with partners Bill MacMahon and Stephen Roberts. D4 quickly established itself as a preeminent Australian interior design, theatre design and architectural company. The company was envisioned as a limited-life-venture, closing as planned five years after its inception. In the spirit of broadening their knowledge across many areas, the partners intentionally embraced a wide range of briefs. Amongst the most notable and enduring were the multi award-winning Rockpool Restaurant in Sydney’s Rocks, which was to become Neil Perry’s flagship restaurant remaining unchanged for 21 years and Regents Court Hotel in Kings Cross, which established itself as the preferred destination for many artists visiting Sydney. Furniture designed by D4DESIGN is today held in the permanent exhibition of the Powerhouse Museum.

As the D4DESIGN partnership exemplified, a central plank in Michael’s career has been the belief that the whole has the potential to be greater than the sum of its parts – that a collaborative art form can lead to truly exceptional works of art. Joining forces with his long-term collaborators director Elke Neidhardt and lighting designer Nick Schlieper, Michael undertook the set design for the long-awaited and first all-Australian production of Wagner’s Ring Cycle, mounted by State Opera of South Australia in 2004. A monumental design challenge requiring more than 20 set models; the process spanned 4 years and was a huge undertaking. The production received worldwide acclaim and continues to be held in high regard as one of the landmark productions of Wagner’s epic work. The production received 11 Helpmann Awards in 2005, an unprecedented number for any production to date, with Michael being awarded Best Scenic Design.

A major exhibition of Michael’s photographs of the Ring Cycle was mounted at the Sydney Opera House in 2005 under the auspices of the Goethe Institute. The National Library has since acquired the collection.

Arguably the most wide-reaching production Michael has been involved in was the 2000 Olympic Games Opening and Closing Ceremonies, which was televised worldwide to billions of viewers. His design of the Cauldron & Ceremonial Stage was a major triumph, with the cauldron being lit by the final torchbearer Cathy Freeman.

After the conclusion of the Games, the Cauldron was installed as the centrepiece of Sydney Olympic Park as an enduring symbol of the successful Olympic and Paralympic Games. In a national survey undertaken three years after the games, the image of Cathy Freeman lighting the Cauldron was deemed as the moment that most penetrated the national psyche, encapsulating the spirit of the Sydney Olympic Games. The cauldron was given permanent heritage protection to coincide with the 10th anniversary of the 2000 Games, and is the youngest item to be placed on the State Heritage Register.

Following the Sydney 2000 Olympic Games, Michael was invited to design the Cauldron, Ceremonial Stages and a number of Cultural Segments for the Opening Ceremony of the 15th Asian Games in Doha, Qatar in 2006, which was also televised worldwide. The Cauldron, in the form of a giant astrolabe, was lit in a spectacular manner by the Qatari Emir’s son, Sheikh Mohammed Bin Hamad Al-Thani, who rode his horse to the top of the Khalifa International Stadium, climbing to a height of 30 metres. The pioneering work Michael undertook on the Sydney Olympic Cauldron was further explored with the Asian Games Doha Cauldron, which embraced kinetic transformation on a massive scale. Like the Sydney Cauldron, it remains on permanent display at the starting point of the sport city and is lit on ceremonial occasions.

Michael continues to contribute to landmark international productions, most recently the Scenic Design for the prestigious Broadway musical Doctor Zhivago, directed by Des McAnuff and the LA season of Debbie Allen’s Freeze Frame.

He has received a great number of awards and nominations recognising his contribution to the performing arts, most recently for Doctor Zhivago, for which Michael received the 2015 Australian production Design Guild (APDG) Award for Set Design.

For many years Michael was an integral part of NIDA, Australia’s leading national institute for training students in the dramatic arts. He was a regular tutor in the design department, joining the Board of Studies in 2006. In 2008 he was appointed Head of Design, in 2011 Director, Undergraduate Studies, and in 2016, Deputy Director of NIDA, and Deputy CEO, extremely highly regarded positions that utilised Michael’s strategic vision and well-honed management skills. After this long and highly successful association with NIDA, Michael recently resigned from his three positions to concentrate on his career as a Freelance Designer.

In recognition of his invaluable contribution to education, Michael was appointed Adjunct Professor of the University of New South Wales in 2017.