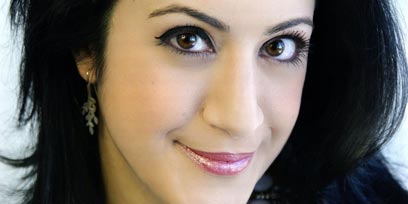 Natalie Aroyan is an Armenian-Australian soprano. She holds a Postgraduate Diploma of Opera from the Sydney Conservatorium of Music and a double-degree in Business and I.T. from the Australian Catholic University, Sydney.

Natalie was awarded first place in both The Opera Foundation New York Competition and the Herald Sun Aria Competition. She participated in the International Institute of Vocal Arts program in Tel Aviv, then commenced her Professional Studies Diploma at Mannes College, New York, studying with Soprano, Ruth Falcon, where she performed the role of Fiordiligi (Così fan tutte), Annina (The Saint of Bleecker Street) and Alice Ford (Falstaff) conducted by Maestro Joseph Colaneri.

As well as attending the “Solti Te Kanawa Accademia” program in Tuscany, Italy, where she worked with both Maestro Richard Bonynge and Dame Kiri Te Kanawa, Natalie has worked with Maestra Renata Scotto in her Tampa Masterclass and participated in The American Institute of Music (AIMS) program in Graz, Austria, where she won first place and was also awarded the audience vote in the 49th Meistersinger Competition Finals.

On her return to Australia she was awarded first place in The Italian Opera Foundation competition, which enabled her to spend a year in Italy studying with soprano, Mirella Freni in her studio at the Accademia of Bel Canto in Modena, Italy. Following this Natalie was invited as a Guest Artist to cover the title role of Gluck’s Armide for the joint Lindemann / Juilliard Production in New York, USA.

Natalie has been a principal artist with Opera Australia since 2013, where her roles have included Mimì (La Bohème), Desdemona (Otello), Micaëla (Carmen), Amelia Grimaldi (Simon Boccanegra), Eva (Meistersinger von Nurnberg) and the title role of Aida (Aida). She also performed the role of Mimì (La Bohème), and the role of Marguerite (Faust) for West Australian Opera, Micaëla (Carmen) for Sugi Opera Company in Korea, Mimi (La Bohème) for Hanoi Opera in Vietnam and created, directed and performed the classically theatrical event “An Armenian Journey” at The Concourse, Chatswood, to mark the 100th Anniversary of the Armenian Genocide.

Natalie has performed in both Opera Australia’s New Year’s Eve programs: Mimì (La Bohème) and as a soloist in the Gala Concerts at the Sydney Opera House.  Her outdoor engagements for Opera Australia include the role of Micaëla in Carmen for Handa Opera on the Harbour, the title role in Aida on the Beach in the Gold Coast, Mazda Opera in the Sydney Myer Music Bowl in Melbourne, Opera in the Domain in Sydney and in 2019 she made her debut in the Opera Gala Concert ‘The Field of Lights’ at Uluru. She has also appeared in concert performances, Greatest Opera Hits and the Opera Australia Salon series.

In 2019 Natalie was nominated for the Helpmann Award for Best Female Performer in a Supporting Role in an Opera for her role in Eva (Die Meistersinger von Nurnberg), and she was awarded the Harding Miller Foundation Opera Scholarship.

Recent engagements have included her debut in Italy, in the roles of Amelia Grimaldi (Simon Boccanegra) at the Petruzelli Teatro di Bari and in the title role of Aida (Aida) at the Teatro G. Verdi di Busseto, during the Verdi Festival.

Natalie Aroyan is supported by Roy and Gay Woodward