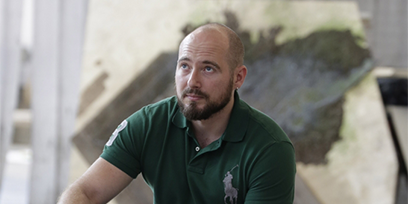 Paolo Fantin, born in 1981 in Castelfranco, completed his secondary education at the art institute in Venice. In 2004 he graduated in Stage Design at the Accademia di Belle Arti in Venice and the following year he specialised in set design and stagecraft.

During 2006 and 2007 Paolo Fantin set the stage of Britten’s The Little Sweep (directed by S.Patarino) and of Amahl e gli Ospiti Notturni in Rovigo which also played at Grand Theatre de Corbeil-Essonne in France, and Sette Piani, theatre work by Buzzati’s book (directed by P.Valerio) in Verona.

In 2004 he collaborated with Damiano Michieletto for the staging of Benjamin Britten’s The Little Sweep produced by Ente Luglio Musicale Trapanese, and then together with the same director, he presented to Berlin Komische Oper and to “Ringaward”, an international award sponsored by Graz Opera House, a scene designed for Le Nozze di Figaro, becoming one of the nine outstanding finalists.

This was the beginning of an artistic partnership that brought Paolo and Damiano together to work on important productions in some of the world most prestigious theatres.

Between 2005 and 2010 Paolo designed the sets for Pasolini’s Il Friuli and La Bella e la Bestia – a world premiere with music by M.Tutino and libretto by G.Di Leva, in Modena. At ROF (Rossini Opera Festival) he prepared the scenes for La Gazza Ladra, which was awarded with Premio Franco Abbiati in 2008. He designed for La Scala di Seta, also played at Palau de les Arts Reina Sofia in Valencia, and for Sigismondo, work for which Fantin was awarded the Premio Franco Abbiati 2011.

Together with costume designer Carla Teti, for the best scenes and costumes, Paolo created sets for Rota’s Il Cappello di Paglia di Firenze at Teatro Carlo Felice in Genoa, for Daugherty’s Jackie’O at Lugo Opera Festival, a coproduction with Bologna. He also worked on Lehar’s Das Land des Lächelns in Triest and he gained a great level of success with the scenes of Lucia di Lammermoor in Zurich. He designed the set of Gounod’s Roméo et Juliette at Teatro la Fenice in Venice, of Die Entführung aus dem Serail at San Carlo in Naples, of Luisa Miller and of a new production of Il Corsaro in Zurich. Moreover, he worked on Il Barbiere di Siviglia at Grand Théatre in Geneve, Madama Butterfly in Turin, Elisir d’Amore at Palau de les Arts Reina Sofia in Valencia, a coproduction with Teatro Real in Madrid, Così fan tutte at New National Theatre in Tokyo, and The Greek Passion in Palermo.

Among the aforementioned productions in which Paolo showcased his designes since 2011, additional works to be mentioned include; Don Giovanni, Nozze di Figaro and Così fan tutte in Venice, La Bohème in Salzburg and Shangai, Puccini’s Trittico in Vienna and in Copenhagen, L’elisir d’amore in Madrid and in Graz, as well as Poliuto in Zurich.  The year 2013 began with a new production of Un Ballo in Maschera at Teatro alla Scala in Milan, Falstaff for the Salburg Festival, followed by Scala di seta at Teatro alla Scala in Milan.

He also designed scenes for drama productions such as; Il Ventaglio of Carlo Goldoni, L’Ispettore Generale of Gogol, Divinas Palabras and Die Dreigroschenoper again with Damiano.

Recent and future engagements include; Idomeneo at Theater an der Wien in Vienna and in Tokyo, Rake’s Progress in Lipsia and Venice, Cenerentola at the Salzburg Festival, Guillaume Tell in Palermo, Cavalleria rusticana & Pagliacci in London, Il Viaggio a Reims in Amsterdam and Australia, Die Zauberflöte in Venice, Un ballo in Maschera in Bologna, Così fan tutte in Barcellona, L’Elisir d’Amore in Bruxelles, Otello at Theater an der Wien in Vienna, Cendrillon at Komische Oper in Berlin, Donna del Lago in Pesaro and Liège, Samson et Dalila in Paris, the new opera Acqua Granda in Venice, Rigoletto in Amsterdam, La damnation de Faust in Rome, Die Lustige Witwe in Venice, Midsummer Night’s Dream at Theater an der Wien, Don Pasquale in Paris, Macbeth in Venice, Der Ferne Klang in Frankfurt, and Les Contes d’Hoffman in London.