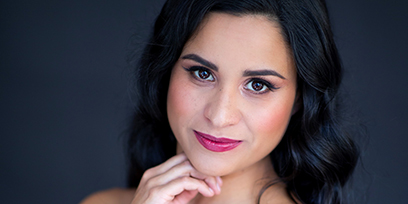 Renowned for her voice of remarkable beauty, warmth, character and expression, Australian-Mauritian Soprano Stacey Alleaume has established herself with an exciting operatic career ahead.

In 2016, she received the Dame Joan Sutherland Scholarship for outstanding Australian operatic talent and became a member of the Moffatt Oxenbould Young Artist Program at Opera Australia. In her first year as a young artist she made three role debuts at the Sydney Opera House: Micaëla in Carmen, Leïla in The Pearl Fishers and Alexandra Mason in The Eighth Wonder.

Further principal roles with Opera Australia have included Violetta Valéry in La Traviata, Flower Maiden 1 in Parsifal and Valencienne in The Merry Widow. Stacey has also toured with Opera Australia performing the roles of Gretel in Hansel and Gretel, Pamina in The Magic Flute and Rosina in The Barber of Seville.

In 2018 Stacey made her debut as Fiorilla in Il Turco in Italia to critical acclaim, and covers the role of Gilda in Rigoletto.

For the National Company in 2019, Stacey performed the roles of Sophie in Werther, Gilda in Rigoletto, Susanna in Le nozze di Figaro and covered the title role in Anna Bolena.

After completing a Bachelor of Music (Music Performance) degree from The University of Melbourne, Stacey undertook the Performance Program at The Opera Studio Melbourne in 2010. Since then her artistic development has been supported by many awards, including grants from the PPCA Performers’ Trust Foundation and Opus 50 Charitable Trust in 2011. In 2010 Stacey received the Dame Nellie Melba Opera Trust Scholarship, and was honoured again in 2012 with the Melba Opera Trust’s Amelia Joscelyne Reserve Scholarship and the Ruskin Family Opera Award. In 2015, Stacey was a vocal fellow and recipient of the Irene Cummings and Theodore Hostetler Full Scholarship at The Music Academy of the West in Santa Barbara, California, under the direction of legendary mezzo-soprano Marilyn Horne.

Stacey has enjoyed considerable success in important vocal competitions, winning the Australian Youth Aria in 2009, and the highly-esteemed Waiariki Institute of Technology New Zealand Aria in 2011. She has triumphed in Australia’s longest-running and most prestigious awards, taking first place in both The Sydney Eisteddfod Opera Scholarship 2012 and the 2013 Herald Sun Aria.