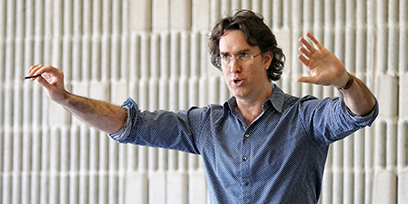 Background: Tahu has worked for Opera Australia since 2007 and in 2017 became Head of Music for the company. He studied piano with Kalle Randalu in Germany, and with Oleg Stepanov and Natasha Vlassenko at the Queensland Conservatorium, where he completed his Master of Music. He is a frequent accompanist for international artists including Teddy Tahu Rhodes, Anthony Dean Griffey, Yvonne Kenny and Emma Matthews.

Other companies: In 2015, Tahu conducted Kurt Weill’s The Seven Deadly Sins for Victorian Opera. This work was paired with the premiere of a new work by four Australian Composers, of the same name, but with updated subject matter and music.

Tahu has conducted many concerts including a concert performance of a new opera, Nelson, by Stuart Greenbaum in London, and a performance of Beethoven’s Ninth Symphony for 4MBS Radio in Brisbane. Last year he made his debut with the Queensland Symphony Orchestra. Tahu performed the Rachmaninov Preludes Op 23 and the world premiere of Ten Concert Studies for Piano, written for him by Edwin Carr (New Zealand International Festival of the Arts – recorded on CD for international release by Kiwi Pacific Records). He has been a soloist in the major concert venues throughout Australia and New Zealand, toured for Musica Viva and Chamber Music New Zealand, and been broadcast on New Zealand and Australian radio and television.