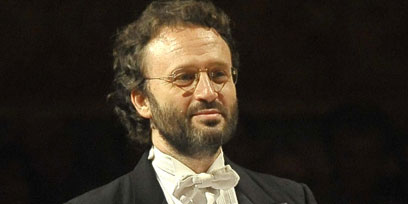 Andrea Molino is known as both a composer and conductor. He was born in Turin and studied in Turin, Milan, Venice, Paris and Freiburg. He lives in Zurich. From 1996 to 2007 he was Musical Director of the Pocket Opera Company in Nuremberg. His own projects the smiling carcass (1999), on advertising and Those Who Speak in a Faint Voice (2001), about the death penalty (both in collaboration with Oliviero Toscani), are examples of his commitment to innovative, multimedia-oriented music theatre. He conducted the death penalty project in Basel and Nuremberg with the Phoenix Ensemble Basel and in New York and Milan with the Klangforum Wien.

Between 2000 and 2006 Andrea Molino was Artistic Director of Fabrica Musica. His multimedia music theatre CREDO, on ethnic and religious conflicts, was premiered in April 2004 at the Badisches Staatstheater Karlsruhe and then performed at the Stazione Termini in Rome with the Orchestra del Maggio Musicale Fiorentino for the World Summit of Nobel Peace Laureates. In 2005 CREDO opened the Queensland Music Festival in Brisbane, Australia. WINNERS, on “winners and losers”, was premiered in 2006 at the Brisbane Festival; the European Premiere followed at the Grande Salle of the Centre Pompidou in Paris.

The multimedia staged concert un Temps vécu, ou qui pourrait l’être was premiered in 2008 at Le Fresnoy, in Lille, where Molino was “Invited Artist” for the season 2007-2008. In 2009, as Artistic Director of the World Venice Forum, he curated the Festival The Garden of Forking Paths. At the Basilica dei Frari he conducted the Orchestra della Fenice in his multimedia concert Of Flowers and Flames, for the 25th anniversary of the Bhopal disaster. His project, Three Mile Island, on the nuclear accident in Pennsylvania, was first performed in 2012 at the ZKM in Karlsruhe; the Italian Premiere followed at the Teatro India in Rome. The project received the Music Theatre Now Award 2012. His most recent work – there is no why here – was premiered at the Opera House in Bologna, Italy in April 2014.

As a conductor, he opened Opera Australia‘s 2013 season with Verdi's A Masked Ball (directed by La Fura dels Baus) at the Sydney Opera House where he had made his debut in 2011 with Carlisle Floyd's Of Mice and Men and Verdi's Macbeth; the Masked Ball was subsequently presented in Melbourne where he was nominated for a Green Room award for his conducting of this spectacular production. In January 2014 he returned to Sydney with the Australian Premiere of Rossini's Il Turco in Italia. He will return to Melbourne in October to conduct Puccini’s Tosca and to Sydney in December/January to conduct La bohème.