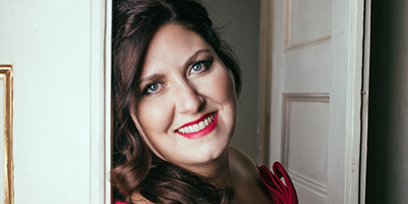 Since her debut in 2012 at the Teatro Regio in Turin, in the role of Amelia in Un Ballo in Maschera, Anna Pirozzi has confirmed to be the most electrifying dramatic soprano of her generation, inspiring “Corriere della Sera” to define her as "an extraordinary dramatic soprano of coloratura" who “will in time be able to set out in the footsteps of Anita Cerquetti, the greatest dramatic colour soprano from 1945 to today." Born in Naples, Anna began her vocal studies at the Istituto Musicale Pareggiato of Valle d'Aosta and perfected at the "G. Verdi "of Turin.

She made her debut at the Salzburg Festival under the musical direction of M° Riccardo Muti as Abigaille in Nabucco, with which she then arrives at the Arena di Verona, at the Palau de les Arts Reina Sofía in Valencia, at the NCPA Beijing, at the New Israeli Opera Tel Aviv, at the Theaters of Opera in Leipzig and Stuttgart, Las Palmas, Menorca, at the Sanxay Festival and in Bologna, Florence, Parma, Palermo and Cagliari and at La Scala.

The international commitments in 2016/2017 saw her debut at the San Francisco Opera in the role of Maddalena of Coigny in Andrea Chénier, at the Teatro Real in Madrid as Lady Macbeth in Macbeth alongside Plácido Domingo, and at the Opéra de Monte-Carlo as Abigaille in Nabucco and debut as Turandot in Israel under the musical direction of M° Zubin Mehta; Macbeth at the Teatro Massimo in Palermo, at the Teatro Regio in Turin and at the Edinburgh Festival;  Andrea Chénier at the ABAO in Bilbao.

In addition, in 2018 she made her debut in three major roles: in the role of Odabella in Attila at the Gran Teatre del Liceu, Norma at the ABAO Bilbao and Manon Lescaut at the Opera in Liège. She also sang in the title role in Aida at the Teatro Real in Madrid.

Recent engagements have led her to the Teatro alla Scala in the role of Lucrezia Contarini in I due Foscari, at the Royal Opera House in London and at the Teatro Comunale di Bologna as Leonora in Il Trovatore (debuted in Turin in 2012), at the Bayerische Staatsoper in Monaco and in Parma as Amelia in Un ballo in maschera, at ABAO - Bilbao opera as Elisabetta I in Roberto Devereux, at the Deutsche Oper in Berlin, Astana Opera, Turin, Rome and Lipsia in the role of Tosca; in São Paulo, Bologna and Cagliari in the role of Lady Macbeth; in Rome as Elvira in Ernani; at the Teatro San Carlo in Naples, Caracalla festival in Rome and at Macerata Opera Festival as Santuzza in Cavalleria rusticana, Maddalena in Andrea Chénier and Leonora in Il Trovatore; at the Carlo Felice Theater in Genoa as the protagonist of Luisa Miller.

Anna Pirozzi regularly collaborates with the most internationally renowned conductors such as Riccardo Muti, Zubin Mehta, Nello Santi, Nicola Luisotti, Daniel Oren, Donato Renzetti, Gianandrea Noseda, Michele Mariotti and Renato Palumbo. Among the last engagements of this year we will see her at the Teatro Regio in Parma in Lady Macbeth at the Deutsche Oper in Berlin with Abigaille and two debuts at the Lyon Opera House with Abigaille and at the Teatro Colon in Buenos Aires again with Norma.

She debuted the role of Leonora in La Forza del destino in the theaters of Piacenza and Modena, then La Gioconda al Liceu in Barcelona. Her future engagements include Macbeth at Metropolitan Opera in New York, Nabucco in Berlin and Amsterdam, Un Ballo in Maschera in Oviedo, Il Pirata in Montecarlo, Turandot in Rome.