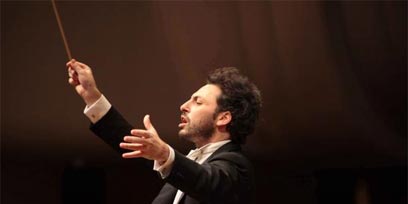 Carlo Goldstein is emerging on the international scene as a young conductor of superb promise. After winning first prize at the International Conducting Competition of Graz in 2009, he has performed extensively in Italy and at many leading concert halls worldwide.

During 2017 and 2018, Goldstein is conducting Turandot as the season opener of the Teatro Grande of Brescia, and Carmen for the opening of Ponchielli of Cremona, both of which will later tour Lombardy theatres; La Traviata at the Seoul Arts Center and Busan Cultural Center in Korea; Madama Butterfly at Seoul Arts Center; and La Traviata once more, at Petruzzelli di Bari. He is conducting symphonic concerts in Israel, made his debut at Petruzzelli di Bari (Prokofiev, Cresta, Mahler and Rota) and will debut at the Sächsische Staatskapelle Dresden (Schönberg, Weber and Mendelssohn).

In recent seasons Goldstein has conducted, among others, Carmen at La Fenice in Venice, La Bohème in the theatres of Reggio Emilia, Como and Pavia, Un Ballo in Maschera at the Seoul Arts Center, Così Fan Tutte at the Opera of Tenerife, Carmen again in Seoul and in the theatres of Livorno, Lucca and Pisa, Adriana Lecouvreur in the theatres of Como, Pavia and Cremona, and Pagliacci at the Summer Festival of the Teatro Sociale di Como – a production which received the prestigious 2016 Abbiati Prize. Other projects have included productions of L'elisir d'amore, Il matrimonio segreto, and L'Orfeo for the Festival della Valle d'Itria.

Carlo Goldstein has always been an advocate of contemporary music. He conducted at the 2016 Milano Musica Festival, and has conducted several early performances of works by contemporary Italian and international composers. He has collaborated with MDI Ensemble and Divertimento Ensemble, among others.

Carlo Goldstein recorded three Mozart Concertos with pianist Andrea Bacchetti and the Orchestra di Padova e del Veneto for Amadeus magazine. Released on the Dynamic label, the recording was enthusiastically reviewed by BBC Music Magazine in London. He also recorded a CD of Italian Arias with tenor Massimo Giordano and the Ensemble of the Orchestra del Maggio Musicale Fiorentino, which was released by BMG.

In addition to his musical studies – at the Conservatory of Trieste, the International Academy of Music in Milan, the Salzburg Mozarteum and the Royal College of London – Carlo Goldstein holds a degree in Philosophy – Aesthetics – from the University of Milan and has published several articles on aesthetics and the history of music. Goldstein has been a featured artist on the Notevoli series, showcasing up-and-coming Italian talents, which was broadcast by the Classica channel on Sky Italia.