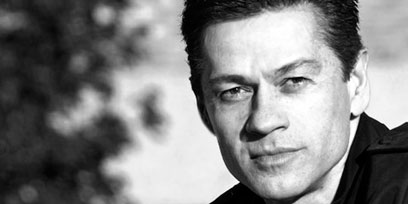 Christian Badea has received exceptional acclaim throughout his career, which encompasses prestigious engagements in the foremost concert halls and opera houses of Europe, North America, Asia and Australia.

Christian Badea’s extensive repertoire ranges from the works of Bach, Haydn, Mozart and Beethoven to the composers of the 21st century. He has conducted complete cycles of symphonies of Bruckner and Mahler and most of the Classical and Romantic repertoire. His programs have frequently included many of the works of such 20th century composers as Zemlinsky, Schoenberg, Berg, Webern, Bartok, Prokofiev, Shostakovich, Stravinsky, Messiaen, Ligeti and Berio. His particular interest in French culture has been present in concert programs and recordings dedicated to French music.

Christian Badea’s strong commitment to contemporary music has brought him in direct collaboration with many composers. Among them are Leonard Bernstein, Samuel Barber, Peter Mennin, Michael Tippett, George Crumb, John Corigliano Christopher Rouse and Romanian composers such as Dan Dediu, Doina Rotaru and Stefan Niculescu, to name just a few.

His discography includes the Saint Saens Symphony no.3 with Royal Philharmonic on the Telarc label, award winning recordings of symphonies of American composers Roger Sessions and Peter Mennin, as well as a live recording of Samuel Barber’s opera Antony and Cleopatra, which won a Grammy Award.

Christian Badea has appeared frequently in the United States on nationally telecast performances. He also featured in televised concerts and opera performances in Italy, Netherlands, Spain, United Kingdom, Austria and Japan and has conducted at festival venues in Florence, Vienna, Paris, Munich, Bucharest, Hong Kong and Verona. He was the Music Director of the Spoleto Festival of Two Worlds for a period of 10 years.

Equally dividing his time between symphony and opera conducting, Christian Badea has appeared as a frequent guest in the major opera houses of the world.

At the Metropolitan Opera in New York he conducted more than 160 performances in a wide variety of repertoire, including many of the MET international broadcasts.

His operatic repertoire encompasses more than 100 operas with particular emphasis on the works of Mozart, Strauss, Wagner, Verdi, Puccini and Tchaikovsky as well as those of 20th century composers such as Prokofiev, Shostakovich, Stravinsky, Berg and Samuel Barber. He has conducted extensively the Italian and French repertoire, collaborating with the most important singers of the last two decades.

Christian Badea received his initial training as a violinist at the Bucharest Conservatory of Music, followed by studies in Geneva and New York with Henryk Szeryng and Dorothy DeLay. He studied conducting in Brussels, at the Mozarteum in Salzburg with Herbert von Karajan and at the Juilliard School. One of his most important mentors in New York was Leonard Bernstein.

In addition to a busy schedule of concerts and opera productions, Christian Badea has worked regularly with young musicians in master classes and residency settings in the USA, as well as in Montreal, Copenhagen, Gothenburg, Melbourne, Stockholm and Bucharest.

As a result of his commitment to the young generation of musicians, Christian Badea established in December 2011 the Romanian Foundation for Excellence in Music, dedicated to helping the careers of the young Romanian musicians through projects of the highest international artistic quality.

Among his projects during the past season, Christian Badea conducted a new production of Don Carlo for Gothenburg Opera in a performance that was hailed as “world class” by the critics, opened the Enescu International Festival in Bucharest with the Residentie Orkest of The Hague and conducted a new production of Die tote Stadt for Opera Australia in Sydney – a triumph with critics and audiences alike. He was immediately asked to return to Sydney and Melbourne to conduct concerts and several opera productions, including Tosca, Otello and Falstaff.

Other opera productions and concerts are scheduled in the USA and Europe for the next seasons.

Recently, he was appointed Principal Conductor of the “George Enescu” Philharmonic in Bucharest.