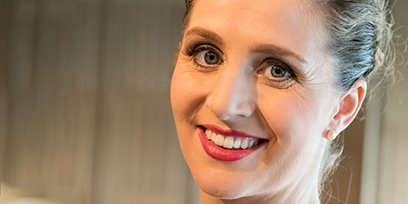 With a "vibrant voice and vivacious personality," soprano Daniela Leska makes her company debut with Opera Australia as Pamina in The Magic Flute. Daniela’s staged roles in Australia, Germany, Switzerland and China include Despina in Così fan tutte, Sophie in Werther, Barbarina in Le nozze di Figaro, Papagena in The Magic Flute, Sorceress in Dido and Aeneas, Annina in La Traviata, The Tailor and Bianca-understudy in the Australian premiere of Goetz’s The Taming of the Shrew, Baker’s Wife in Into the Woods and, with Sharolyn Kimmorley AM, Daniela prepared the role of Zerlina in Don Giovanni within a JUMP Mentorship. Daniela has performed opera excerpts as Cleopatra in Giulio Cesare, Gilda in Rigoletto and covered Micaëla in Carmen.

As a soloist on the concert platform in 2017, Daniela has performed Handel’s Messiah with Willoughby Symphony; Mozart’s Requiem with the Sutherland Shire Choral Society and the arias 'Měsíčku na nebo hlubokém,' 'Donde lieta uscì' and 'Steal me, sweet thief' in the Utzon Room, Sydney Opera House.

By personal invitation from the Consulate General of the Republic of Poland in Sydney, Daniela has sung Chopin and Szymanowski songs in Verbrugghen Hall. Other engagements have included Drei Lieder der Ophelia for the Lieder Society of Victoria; live performances for 3MBS, 5MBS and SBS Polish Radio; for past Prime Minister Kevin Rudd; and, as cantor and guest soprano, for the major cathedrals in South Australia, Victoria, Western Australia and in Mary Immaculate Church, Sydney, accompanied on organ by The Consulate of Solomon Islands.

A fully-funded Pacific Opera Young Artist in 2017, Daniela has been a quarter-finalist in the Sydney Eisteddfod Opera Scholarship and the recipient of two generous George Boland Scholarships and an ArtStart Grant. She has previously studied piano, cello, dance and currently teaches voice at Ascham and Meriden schools. Daniela holds a Bachelor of Music with First-Class Honours at Adelaide’s Elder Conservatorium of Music and a Graduate Diploma at Western Australia’s Academy of Performing Arts (WAAPA). danielaleska.com