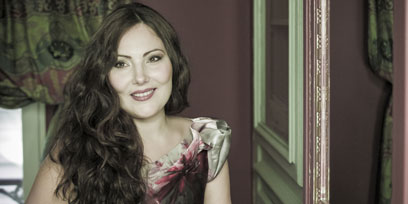 Ekaterina Siurina is an established Russian soprano who studied at the Russian Academy of Theatrical Arts, Moscow. Here she had performed some challenging repertoire including Gilda in Rigoletto, where she made her professional debut singing opposite world-renowned baritone Dimitri Hvorostovsky at the Novaya Opera. Siurina also became a soloist with the Municipal Moscow Theatre, and was a prize winner of the Rimski-Korsakov competition in St Petersburg during her studies.

From here, she went on to master multiple key parts including Rimski-Korsakov's The Snowmaiden, Adina in L’elisir d’amore at the Staatsoper Berlin and Staatsoper Hamburg, Gilda in Rigoletto at the Royal Opera House in London and the Deutsche Oper Berlin, and Servilia in La Clemenza di Tito at the Paris Opera Garnier.

Her Italian debut was made as Susanna, Le nozze di Figaro at Teatro alla Scala, Milano. Following this she sung Ilia, Idomeneo which was recorded live for Decca at the 2006 Salzburg Festival and later released on DVD to commemorate Mozart’s 250th birthday. In October 2006, she made her MET debut with Juan Pos and was invited back in November 2007, with Bryn Terfel.

Past seasons have included a triumphant return to Covent Garden for Pamina, Die Zauberflöte, Gianni Schicchi at the Royal Opera House, L’elisir d’amore with Opera de Nice and the Glyndebourne Festival, Le nozze di Figaro at Opera de Paris and Zerlina in Don Giovanni at the Salzburg Festival.

She released her debut solo album, ‘Amore e Morte’ for Opus Arte featuring songs by Verdi, Bellini, Donizetti and Rossini. Also released in 2014, she features amongst others on the complete Rachmaninov songs disc, accompanied by Iain Burnside, released on Delphian records.

As a versatile soprano, Ekaterina is in demand within the opera scene, performing at some of the world’s greatest opera houses, as well as being recognised on the concert platform, where she has worked with many of today’s prominent conductors including; Yuri Temirkanov, Evelino Pidò, Daniel Oren, Philippe Jordan, Sir John Eliot Gardiner and Richard Bonynge. She had a successful previous season performing Gilda in Rigoletto at the Wiener Staatsoper, Nanetta in Falstaff at the Bayerische Staatsoper and recitals with her husband and renowned tenor Charles Castronovo. She closed the 2014-15 season with a solo recital at Choregies d'Orange.

This talented vocalist leads her generation of singers and continues to perform significant roles across the world. She has recently opened the 2015-16 season with La traviata with the Canadian Opera Company and in 2016 makes her debut with Opera Australia for The Pearlfishers, before performing Capuleti e i Montecchi at the Liceu Barcelona. This is followed by a recital with Charles Castronovo at the Wigmore Hall, London. Future engagements also include appearances at the Royal Opera House and at the Grand Theatre de Geneve.