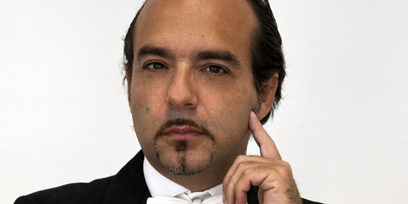 Gianluca Martinenghi is a prominent conductor of the younger generation of Italians. He studied piano with Piero Rattalino and composition with Bruno Bettinelli. He went on to complete his conducting studies with such notable figures as Donato Renzetti and Giacomo Zani, which lead in turn to his collaborating with various youth orchestras. He began his career at Teatro Regio di Torino where he worked as head of music, which enabled him to familiarise himself with the operatic repertory, assisting highly respected musicians such as Gianandrea Gavazzeni and Yuri Ahronovitch.

A further spell was spent as the Artistic Director of the Teatro Maggio Musicale Fiorentino where he worked with artists at the highest level.

For two years running he took part in the inauguration of the Tenerife Festival with Verdi’s Falstaff and Puccini’s Tosca and was appointed as principal guest conductor to the festival by the director, Giancarlo Del Monaco.

He received excellent reviews for the CD recordings of Puccini Arias and Verdi Duets with the soprano Amarilli Nizza and Roberto Frontali. He has also recorded a CD with Orchestra dell'Arena di Verona for EMI for a tribute to Enrico Caruso.

In 2012 he conducted two of the most important international orchestras: Münchner Rundfunkorchester and L'Orchestre Symphonique de Montréal and was invited to conduct the rarely performed Iris by Mascagni for the Fondazione Arena di Verona (which previously had only been conducted at Verona by Mascagni himself) achieving considerable success from both press and public alike.

Recently he conducted in Dubrovnik Festival, in Taormina Opera Festival and in NCPA of Beijing.

Among the next and more important commitments, Madama Butterfly in Sydney for Opera Australia and Italiana in Algeri in Teatro de Opera de São Paulo.