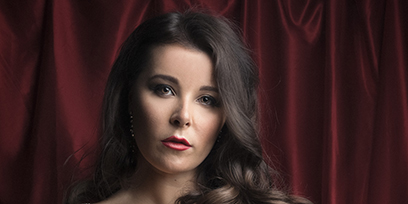 Australian-Italian Soprano, Giuseppina Grech, holds a Bachelor of Music (Performance) from the Melbourne Conservatorium of Music, The University of Melbourne. In 2014, Giuseppina won first prize in the prestigious Italian Acclaim Opera Fellowship Awards which enabled her to study at the Teatro Accademia alla Scala (La Scala), Italy, studying under the tutelage of renowned intentional soprano Luciana Serra.

Giuseppina now resides in Sydney, performing regularly with Opera Australia. Giuseppina was delighted to make her debut with the company in 2016 performing the title roles of Isabella and Ferdinand in the new opera El Kid featuring the music from Bizet’s Carmen in Opera Australia’s Victorian and NSW Schools Tour. Highlight performances with the company also include La Bohème at Handa Opera on the Harbour, Lucia di Lammermoor, Aida, Madama Butterfly, and Anna Bolena at the Sydney Opera House.

Giuseppina tours Nationally and Internationally with some of Australia’s most celebrated artists as their special guest Soprano, headlining with artists including Mark Vincent, The Australian Tenors, and Maestro Ian Cooper in An Afternoon at the Proms. She has also shared the stage with illustrious artists including Yvonne Kenny, Teddy Tahu Rhodes and James Morrison at Opera in the Alps, Opera by the Loch, and Opera in the Market with the Alpha Sinfonia Orchestra conducted by Guy Noble. Being recognized as one of Australia’s finest young opera singers, Giuseppina was featured on the Channel Seven Network in Sydney’s Woolworths Carols in the Domain hosted by Sunrise. In 2019, Giuseppina will perform solo on Bravo Cruise of Performing Arts with headline artists including Welsh Bass-Baritone Bryn Terfel.